END_OF_DOCUMENT_TOKEN_TO_BE_REPLACED

GOLD PRICES fell to 2-week lows against a rising US Dollar on Tuesday, dropping 1.8% while sister metal silver erased all of yesterday's 11.0% spike as New York's stock market opened sharply higher.
Silver bullion prices today retreated $3 from Monday's 8-year high of $30 per ounce while gold fell back to $1830.
Following last week's Reddit chatroom call to buy silver – a call which saw the iShares SLV ETF expand by over 1,000 tonnes on Friday – "Entire silver industry is wiped out," claimed one US coin and small-bar dealer to CNBC overnight.
A larger US competitor meantime asked 35% above spot prices for American Eagle coins today – a margin also being asked by coin dealers here in the UK for Silver Sovereigns, even before the 20% VAT sales tax then added on top.
Comex silver futures to be settled in New York continued to show backwardation, with near-term contracts priced slightly above later dates to suggest that immediate supplies have become tighter.
"[But] physical silver supplies are appearing in the market in response to the spike in price," says specialist analyst Rhona O'Connell at brokerage StoneX.
"While it looks as if there is some mild nearby tightness in the first month or so, the forward curve is largely positive." 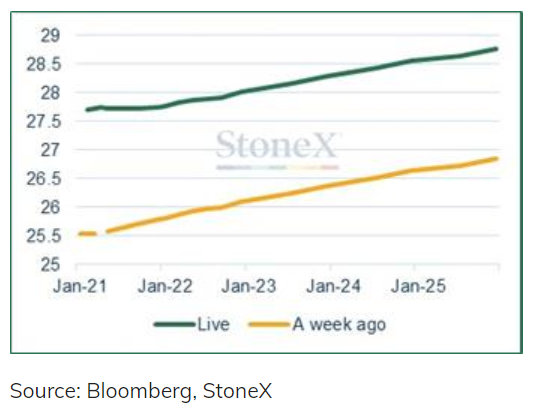 London silver vault holdings stood at 33,608 tonnes at end-December, trade association the LBMA said today, while silver trading volumes yesterday hit 32,190 tonnes in the London market.
"The high volume marked the culmination of a week of exceptional but not extreme trading," the LBMA said.
"The market continued to demonstrate liquidity and durability, and no issues arose impacting either trading, settlement, or the efficiency of the daily price auction."
Even with wholesale silver bullion prices retreating Tuesday, says O'Connell, "at this level the market is still well overbought and while there has been a headlong rush into ETPs and heavy demand for silver and coins in the western hemisphere and parts of Asia, grass roots activity in the Gulf has withered.
"In India, while gold demand has been picking up, silver has been sluggish since the pandemic began and this latest price surge is likely to keep potential buyers side-lined for the time being."
Typically the world's No.1 household consumer of silver products from jewelry to coins and silverware, India yesterday slashed its official import duty on the metal from 12.5% to 7.5% in a surprise but widely welcomed move in the Government's 2021 Budget.
"Hopefully, this is the first of a series of such cuts to make bullion an asset class that operates mainstream," says P.R.Somasundaram of the mining industry's World Gold Council, citing the likely reduction in bullion smuggling now that the incentive has been reduced.
After new ISM PMI data said Monday the US manufacturing recovery slowed a little in January as the prices paid hit their highest since 2011, today's 2020 GDP data for the 19-nation Eurozone said the world's 2nd largest economic bloc shrank by 5.1% last year, better than the 5.4% contraction analysts forecast.