END_OF_DOCUMENT_TOKEN_TO_BE_REPLACED

GOLD PRICES jumped 1.7% as New York trade started on Thursday, hitting 1-month highs as US equity markets followed Euro stocks sharply lower and platinum-group metals rallied despite a further drop in broad commodity markets.
US Treasury bonds also hit 1-month highs, pushing 10-year yields down to 2.06%.
Bullion's benchmark price auction in London cleared on strong volume at $1154.50 per ounce – the highest level since 24 August.
Silver meantime leapt 2.7% inside 90 minutes to recover all of the week's previous plunge, hitting $15.20 per ounce.
Platinum also rose ahead of gold prices, bouncing 2.5% from the morning's new 6.5-year lows but holding more than 7% down for September so far after the scandal over VW's diesel-engine emission tests saw the world's largest car-maker's CEO resign.
Shares in luxury auto-competitor BMW today dumped 10% in Frankfurt as it denied claims in a German magazine that the X3 SUV breaches European rules on pollution.
"There is a great deal of confusion," says analyst Tom Kendall at bullion bank and commodities dealer ICBC Standard Bank, warning that this week's bounce in palladium versus platinum prices misses how "this time last week the concern was – rightly – about slowing vehicle sales growth in China.
"That concern has not gone away. The 3- to 5-year outlook for palladium demand [in catalysts for petrol engines] may have become a little stronger, but we think those who want to play the long game will get a better entry point."
Looking at the auto-industry, "Just as banks were keen to beef up their compliance and be seen to be doing the right thing following the LIBOR scandal, so too it is imperative that automakers rebuild trust and their reputation," writes Jonathan Butler, precious metals strategist at Japanese conglomerate Mitsubishi, and also like Kendall formerly at platinum specialists Johnson Matthey.
"Convincing regulators and the public of their green credentials [means] going out of their way to over-engineer emissions devices that genuinely cut pollution – [and] this would be positive for PGM demand, in our view."
Amongst precious metals investors, "Substantial relative trades [betting] long-platinum, short-gold" had built up earlier this summer, according to BMO Capital Markets in New York.
Latest data from US regulators last week showed speculative traders in the 'Managed Money' category holding 3 bullish bets on platinum futures and options for every 2 bearish bets.
On gold in contrast, the number of bearish and bullish bets held by the 'Managed Money' group was almost perfectly balanced.
Platinum prices have traded near $300 per ounce above gold on average over the last 10 years. But the white metal today held more than $200 below, near to its record-wide discounts of late 2011.
Starting from a discount of $50 per ounce earlier in 2015, "Long platinum, short gold" had been a favored trade recommendation for some brokers and analysts. 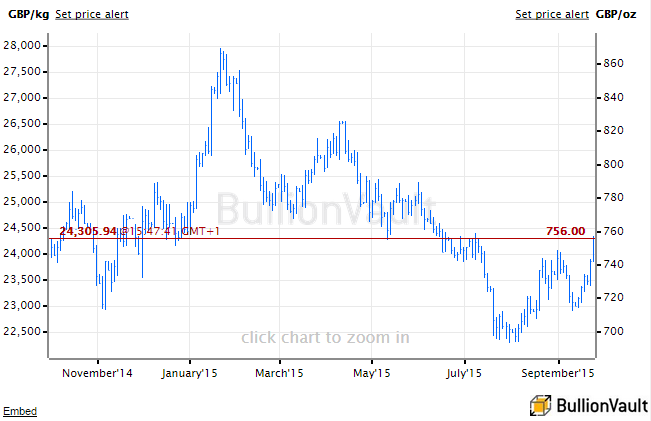 Gold priced in Sterling meantime fixed at a 3-month high of £756.75 per ounce on Thursday afternoon as the Pound fell hard on the FX market.
Recovering all of July's drop, and gaining 9.1% from early August's new 5.5-year low, that also put the gold price in British Pounds level with its start to New Year 2015.