END_OF_DOCUMENT_TOKEN_TO_BE_REPLACED

GOLD PRICES jumped $10 to new 1-week highs above $1854 per ounce on Wednesday after new US data said consumer-price inflation in the world's largest economy slowed to 1.4% in January, just below analyst forecasts for 'core' inflation excluding volatile fuel and food costs.
Silver failed to follow, ticking up to $27.45 per ounce.
But its fellow industrial-precious metal platinum leapt once again, gaining over $70 from the start of Asian trade to touch $1253 at lunchtime in London – the highest spot bullion price since March 2015 – as the white metal's No.1 mining nation South Africa was hit by electricity cuts from scandal-hit state-owned energy monopoly Eskom.
Inflation turned negative in January in world No.2 economy China, Beijing said earlier, with consumer prices deflating by 0.3% even as new bank lending tripled last month from December's total.
Inflation expectations in the US Treasury bond market held however above 2.2% for the next decade, the highest since August 2014, while global stock markets extended their gains into the 8th session running, led by 2.1% gains in China's CSI300 index.
With China's financial markets now closed for the Lunar New Year of the Ox holidays until Thursday next week, Wednesday's gains took the CSI almost one-half higher from this time last year, when the Covid-19 outbreak starting in central-city Wuhan began making headlines and crushing financial markets worldwide.
New York's Nasdaq index of US-listed tech stocks comes a close second, gaining 45.5% from 12 months ago and setting new all-time highs on 55 of those 253 trading days, including the last 4 sessions. 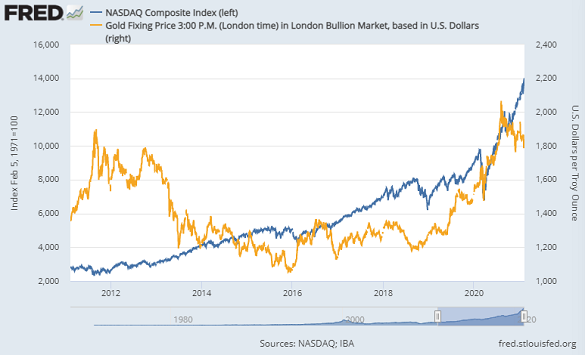 "The platinum market remained in deficit in 2020," says technology specialist Johnson Matthey in its new PGM Market Report, "with sharply lower supplies, and strong investment demand.
Platinum's shortfall of supply over demand came even as autocatalyst consumption "plunged by 22%, with steep falls in European diesel car production," says JM.
Sinking to 2002 levels in last March's Covid Crash across all financial markets, platinum prices traded 10.6% higher for the week so far after South Africa's struggling power utility Eskom imposed a fresh round of electricity cuts – extending a run starting last Saturday – on households and business, running from 1pm through to 6am Thursday local time.
"The mining industry is heavily reliant on electric output," notes the precious metals team at French bank and London bullion market makers BNP Paribas, "and so is likely to suffer production slowness.
"That obviously translates into higher prices of PGMs today."
Eskom is currently the subject of South Africa's official Kondo enquiry into "state capture" by multi-national businesses aided by corrupt politicians, with global consultancy giant McKinsey agreeing in December to repay US$40m in fees to Pretoria and the People's Assembly yesterday demanding answers over Eskom's "fruitless and wasteful" spending on unfinished accommodation for its workers at the Kusile power plant, 70 miles north-east of Johannesburg.
Looking ahead to 2021, "PGM supply and demand are forecast to bounce back in a V-shaped recovery," says Johnson Matthey's new report.
"Autocatalyst demand will recover strongly on higher car output and stricter emissions limits for trucks in China. Industrial consumption will remain robust, with PGM use in chemicals [manufacturing] set to reach an all-time high."
Shanghai gold prices meantime ended the fateful Year of the Rat at an $8 per ounce premium to London quotes, inviting new imports and showing a solid balance of demand over supply in the precious metal's No.1 consumer market ahead of China's week-long peak gold-buying season after 2020's historic glut and discounts.