END_OF_DOCUMENT_TOKEN_TO_BE_REPLACED

PRECIOUS METALS prices rallied on Wednesday in London, led by a jump in palladium after the UK Government extended its sanctions against Russia over the invasion of Ukraine to target Vladimir Potanin, head of the PGM metal's No.1 miner, Norilsk.
"UK sanctions Russia's second richest man," said the Government of Boris Johnson's press release, using the same description on a photo of Potanin and claiming that its latest actions are "hitting Putin's inner circle."
Gold bullion rose 1.1% against a rising US Dollar, erasing this week's prior loss after the price of palladium leapt $100 per ounce, peaking above $2000 before easing back but holding at 3-week highs.
Palladium priced in UK Pounds and Euro rose faster, setting 1-month highs above £1660 and €1920 per ounce respectively.
The UK gold price in Pounds per ounce broke back above £1500 while gold in Euros touched €1740 –  up by 1.5% from Monday's 3-week low – as new data confirmed consumer confidence across the 19-nation currency zone fell this month to the worst on record outside of the Covid Crisis of spring 2020 and the global financial meltdown of late 2008.
Led again by surging energy prices amid restricted flows from Russia, Spain's inflation rate is now "running amok" above 10% says El Pais, the worst since 1985 on INE data.
Consumer-price inflation in Germany eased from May's 4-decade record to 8.2% per year, Destatis said, thanks to emergency tax cuts on fuel and discounted train fares. 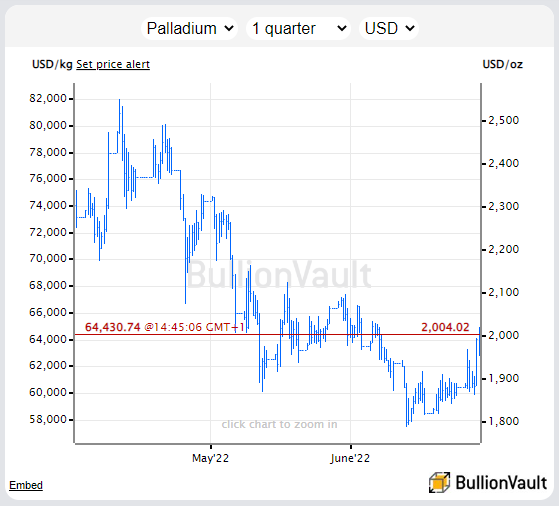 Shares in Norilsk (MOEX: GMKN) – which produces some 38% of the world's newly-mined palladium each year – sank in Moscow to their lowest since Russia invaded Ukraine 4 months ago, near levels previously seen during the initial spring 2020 Covid Crisis.
With palladium finding well over 4/5th of its annual end-use demand from autocatalysts to cut harmful emissions from petrol engines, sales of new passenger cars in Western Europe are forecast to drop below 10 million this year, down by 1/3rd from 2019 thanks to the war in Ukraine and post-Covid disruption to global supply chains.
Looking at Wednesday's surge in palladium prices "UK car production last year, at just under 800,000 vehicles, was just 1.1% of the global total," notes bullion-market specialist Rhona O'Connell at brokerage StoneX.
"So the near 6% jump in palladium prices in response to [today's UK] announcement may unwind to some extent, although cautious sentiment may well add some support
"The real fur-flying time would be if the US followed suit. [That's] doubtful."
Palladium's sister metal platinum – which now finds less than 2/5th of its demand from diesel-engine autocats – today popped to $940, up 4.5% from this week's test of 6-month lows, before slipping back $15 per ounce.
Silver was the least excited precious metal, briefly adding 30 cents to touch $21 per ounce but the  falling back below last week's London close of $20.86 – itself just 2 cents above the lowest Friday finish since July 2020.
Condemning Russia's "war of aggression" against Ukraine, leaders of the Nato military alliance of Western nations today invited Russia's neighbors Finland and Sweden to become new members.
"Warmly" welcoming Ukrainian President Zelensky's requests for more military aid – and noting the participation of Asia-Pacific "partners" in the transatlantic alliance's meetings – Nato's joint statement also said its members face "systemic competition from those, including the People’s Republic of China, who challenge our interests, security, and values and seek to undermine the rules-based international order."