END_OF_DOCUMENT_TOKEN_TO_BE_REPLACED

The Stockton Report makes some valid criticisms – but ducks the key issues...

I WAS PLEASED earlier this year when the Court of the Bank of England commissioned a review of the Monetary Policy Committee forecasts published in the Bank's Inflation Report, writes former MPC member Andrew Sentance.

In my last year as an external member of the MPC, I had publicly outlined my own critique of the Bank of England's approach to forecasting inflation.

My argument was that the Bank of England staff and the majority of MPC members were putting far too much weight on the view that there was a large "output gap" which would drive down inflation. And they gave far too little recognition to the role of the global economy, the growth of nominal spending and movements in the Sterling exchange rate in pushing up inflation.

I set out my arguments in a number of speeches and articles in the first half of last year – notably my "Selling England by the Pound" speech in February 2011 and my penultimate MPC speech in Manchester in April. And my prognosis turned out to be broadly correct. I argued that the Bank forecasts driven by the consensus view on the MPC were far too optimistic about a fallback in inflation. Inflation peaked at over 5% last autumn and has yet to fall back below 2%.  Rising energy and food prices this winter probably mean inflation is set to rise again – towards the 3-4% level which has been the average inflation rate since the onset of the financial crisis. By contrast, MPC forecasts have tended to project medium-term inflation at around 1-2% and continue to do so. 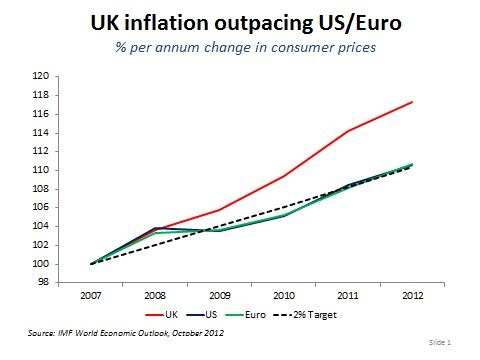 The Bank of England forecast review – which was conducted by Dave Stockton, an experienced economic forecaster from the US Federal Reserve – has now been published. It contains some useful recommendations – particularly in terms of the process of carrying out the forecast. However, Stockton ducked the key issue of whether the MPC's approach to analysing the economy was a key factor contributing to its forecasting errors.

Here are two key paragraphs from his report:

69. On the whole, I find the Bank narrative for its forecast errors of recent years reasonably persuasive, assuming that I have stitched it together correctly. But that narrative leaves open the question of whether the serial persistence of the MPC's recent errors represents only a string of bad luck, points to some slowness in responding to these errors as they became apparent, or reflects a deeper flaw in the analytical framework of the MPC. And, the lack of more detailed quantitative support for the narrative makes it quite difficult to assess its balance and completeness.

97. Some former MPC members that I interviewed reported that they encountered difficulties getting divergent points of view to be seriously considered in the forecasting process. As expressed to me, the problem was one of breaking strongly held "house views" on key issues relevant to the forecast. Some examples provided were the magnitude and duration of the effects of financial shocks on aggregate demand, the effects of house prices on consumer spending, and the effects on aggregate prices of relative price shocks, such as changes in oil prices. As noted above, for a brief period in the early 2000s, some MPC members requested an additional table be included in the Inflation Report to illustrate the consequences of their alternative judgments about key aspects of the forecast. More recently, the public surfacing of such differences has relied on the initiative of the individual MPC members that have held divergent views.

These key paragraphs let the MPC off the hook in terms of its significant forecast errors. But they are not consistent. Para 69 says that the MPC was probably just unlucky and just made some bad judgement calls. Para 97 says that there were voices on the MPC alerting the Committee to these bad judgements. The fact that these voices (including my own) were downplayed or ignored could well mean that the way in which the MPC was looking at the UK economy and the outlook for inflation was wrong and is still wrong. But Stockton did not pursue this line of analysis in his report.

It is domestic factors, rather than the global economy, which account for the UK's high inflation and the forecasting failures of the MPC. These include the big decline in the sterling exchange rate. But the resilience of domestic demand and high and persistent service sector inflation have also played a part. These were all factors I highlighted in my late 2010 and early 2011 speeches as a member of the MPC.

I stand by the critique which I advanced in early 2011. The Bank of England continues to put too much faith in the power of the "output gap" to hold down inflation, and it continues to underplay the impact of the global economy and the exchange rate. This is not just a forecasting error – it feeds through into policy misjudgements. When the global economy was powering ahead in 2010 and early 2011, there was an opportunity to start to raise UK interest rates from the emergency levels in 2009. That opportunity was missed.

The exchange rate has been a powerful influence on UK inflation since 2007, and yet the MPC is reluctant to acknowledge that it can influence the value of sterling by changing UK monetary policy. This flies in the face of conventional open economy macroeconomics. In a relatively open economy like the UK, the impact of monetary policy on the exchange rate is a key channel through which changes in interest rates might affect inflation, and this was a key part of my argument for a modest tightening in UK monetary policy in 2010/11.

So 5/10 for the Stockton Report. It contains some valid criticisms of MPC processes and practices. But it ducked the key issues in terms of the way the MPC analyses the UK economy and produces its forecasts. In its approach to forecasting inflation, the Bank of England and the MPC still puts too much emphasis on the "output gap" and not enough on the global economy and the exchange rate. Until this is rectified, the MPC forecasting record will not improve.