END_OF_DOCUMENT_TOKEN_TO_BE_REPLACED

PRICES to invest in gold fell back from an overnight rally Friday morning in London, trading at $1413 for a 0.9% weekly gain as global stock markets rose but showed a slight decline for the week as the G20 group of world leaders met in Osaka, Japan.
Friday's retreat still put gold prices on track for their 6th strongest monthly gain of the last decade for anyone choosing to invest with US Dollars, up 8.3% for June 2019.
"It's a convincing break-out showing a macro regime shift," says Nicky Shiels of Canadian dealers Scotiabank.
"Global central banks are moving from a dovish stance to a super-dovish stance."
"The sustained decline in rates is a key factor [for gold's price jump]," agrees a note from Swiss financial services giant and bullion bank UBS, "particularly as the Fed shifts to a more dovish stance."
Raising UBS's end-September price target from $1380 to $1430 – almost $10 shy of Tuesday's peak –"Uncertainty around growth and trade risks suggests more strategic positions are likely to be built," the note adds.
Gold investment however showed a small outflow Thursday from the 7 largest US-listed gold ETFs as a group, with the giant GLD shrinking 0.3% while No.2 the IAU grew 0.4% on the day.
Together those gold ETFs have swollen by 5.5% in June, the heaviest 1-month growth since the UK's shock Brexit referendum result of mid-2016.
Their aggregate bullion backing however, needed to back the value of their shares in issue, have only reached the largest since New Year 2019 levels at 1,228 tonnes.
Last time prices to invest in gold bullion ended a calendar month near $1400 per ounce, back on August 2013's bear-market bounce from the metal's sharpest plunge in 3 decades, the largest US gold ETFs were almost exactly the same size as today, needing 1,234 tonnes of backing. 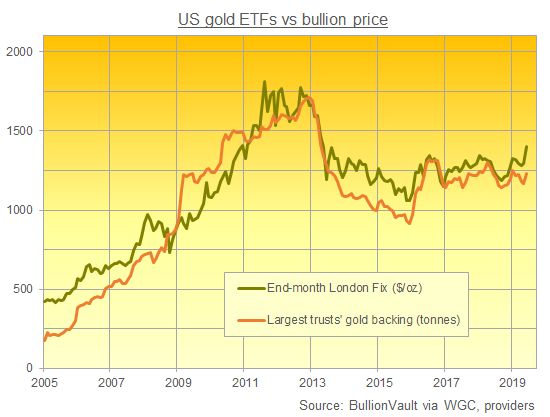 Having attacked India's Prime Minister Modi over "unfair" trade tariffs ahead of this weekend's G20 meetings, US President Trump also attacked allies Germany and summit hosts Japan over military spending before landing in Osaka.
"Doubts about the success of the meeting between [US President Trump and China's President Xi] have been weighing on risk assets, reckons German analyst Peter Fertig at Quantitative Commodity Research.
"That is positive for gold [investing]."
US stock markets headed for a small weekly fall as New York opened Friday, after the Dow Jones Industrial failed to reach October's all-time record-high close at the third time of trying on Monday, before suffering its worst 1-day drop in a month on Tuesday.
Crude oil meantime rose 2.2% from last week's finish, while Western government bond prices paused after this month's surge, holding longer-term interest rates down near this week's new multi-year and record lows.
Back at the G20, "China's utmost sincerity" in trade talks so far, says Beijing's state news agency, "seems to have only prompted some trade hawks in Washington to press their luck...[because] some ultra-conservative US decision-makers have for many years seen in China a 'threat' to Washington's sole superpower status."
"China's efforts to undermine democracy are expanding worldwide," counters the Washington Post, quoting a report from Republican think-tank IRI saying that, after examining Beijing's strategy in 13 countries, it believes China's foreign policy "now represents a clear and significant threat to US strategic and economic interests."
The US President meantime joked to Russia's President Putin this morning about Moscow meddling in next year's White House election.
British Prime Minister Theresa May in contrast told Putin that Russia must end its "irresponsible and destabilising activity", demanding that the Russian agents Britain believes poisoned former KGB spy Sergei Skirpal in March 2018 are "brought to justice".
"Every crime must have its punishment," Putin yesterday told the Financial Times in his first sit-down interview with a UK journalist in 10 years, commenting not on the Salisbury poisonings but on what he called Western Europe's "cardinal mistake" in accepting refugees from the Syrian war and apparently letting them "kill, plunder and rape with impunity because their rights as migrants have to be protected.
"[That] liberal idea has become obsolete. It has come into conflict with the interests of the overwhelming majority of the [Western] population."