END_OF_DOCUMENT_TOKEN_TO_BE_REPLACED

GOLD PRICES slipped back below $1800 per ounce Wednesday as longer-term interest rates rose further on government bonds, hitting new multi-month and multi-year highs for rich Western economies' borrowing costs as new US President Joe Biden pushes for $1.9 trillion in Covid relief and stimulus.
"Bank of England rate-hike bets pick up," says a headline on Bloomberg about the UK central bank.
"Bond-market revolt endangers India's fragile recovery," says another.
But "the pandemic has... left a significant imprint on inflation," said US central-bank chief Jerome Powell in his regular testimony to lawmakers in Congress on Tuesday.
"For some of the sectors that have been most adversely affected by the pandemic, prices remain particularly soft...The economy is a long way from our employment and inflation goals, and it is likely to take some time for substantial further progress to be achieved."
"[Our] economists forecast US inflation to rise a little over 2% over the next two years," says US investment bank Morgan Stanley's cross-asset strategy chief Andrew Sheets – " hardly the runaway type of scenario for inflation that gold would seem best suited for.
"Gold is an asset where the narrative matters. In 2021, the pandemic looks set to get better. Economic data is improving. Politics have become calmer. And interest rates are starting to rise."
With 10-year US Treasury yields today rising to 1.39% per annum – the highest in precisely a year – yields on 10-year inflation-protected Treasurys eased back, dropping 3 basis points from yesterday's level of minus 0.79%, the highest since Pfizer's successful vaccine trial announcement knocked $100 off gold in early November.
That suggests average US inflation between now and 2031 of 2.2% per annum.
Core PCE inflation – the Fed's preferred measure, still with a 2.0% target according to Powell on Tuesday – hasn't read that high since August 2008, eve of the Lehmans' crash phase of the global banking crisis. 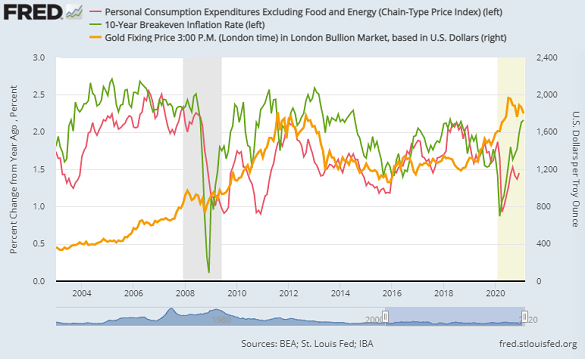 "We are seeing investment flows into gold as market participants grow more anxious about rising real rates that can impact equity valuations," said Canadian brokerage TD Securities' commodity strategist Daniel Ghali earlier this week.
"[While] the Dollar at the moment is low and that is supporting," agrees German financial group Commerzbank's Eugen Weinberg, "the real reason for the gold price to increase in the longer term is the chances of inflation picking up."
However, both the giant SPDR Gold Trust (NYSEArca: GLD) and its smaller competitor the iShares product (NYSEArca: IAU) saw net liquidation by investors yet again on Tuesday as Powell gave his testimony to lawmakers.
Extending a stretch of the major gold ETFs bleeding metal, that shrank the GLD to its smallest since May last year and the IAU to its smallest since mid-October.
Silver's largest ETF grew in contrast, expanding for only the 2nd time in the last 3 weeks since the Reddit Ramp – led by internet chat-room claims that a 'short squeeze' would spike prices by crushing bearish traders – spurred a surge of demand for the iShares product (NYSEArca: SLV).
Tuesday saw the SLV expand by 1.3%, reversing a little over 1/10th of the 2,038 tonnes of outflows made since 3 February.
Silver slipped 10 cents to $27.70 as gold prices flipped in a tight range around $1800 as the opening of US trade Wednesday.
The UK gold price in Pounds per ounce meantime erased this week's earlier £15 gain to trade back at £1275, only just above last Friday's 12-month lows.
Euro gold prices held firmer at €1484 as the single currency continued to slip against the US Dollar.