END_OF_DOCUMENT_TOKEN_TO_BE_REPLACED

GOLD PRICES erased a $10 spike in London trade Thursday, holding little changed overall with a 6% gain for 2022 to date in Dollar terms as Russia's President Putin vowed an "uncompromising fight" in Ukraine and US central-bank chief Powell said the Fed will raise interest rates a quarter-point from zero at this month's policy meeting.
The Dollar gold price traded above $1925 per ounce for the 2nd day running as Asian equities closed higher but European bourses fell again, taking the German Dax index's losses to 10.0% from this time last month.
Crude oil prices meantime hit 14-year highs above $110 per barrel as buyers worldwide were reported to be rejecting supplies from Russia – the 3rd largest oil exporter – amid fast-tightening sanctions against the country.
With surging prices for oil and gas driving US inflation to the highest since 1982 last month at 7.5% per year, "Inflation is too high. We understand that," Powell told US lawmakers in regular testimony Wednesday, accepting that Covid Crisis stimulus from both Washington and the Federal Reserve has helped worsen the rise in the cost of living.
"It's going to take some time, but we're going to get [inflation] back under control."
Powell's comments on interest rates saw betting on a half-point hike evaporate to zero, having been priced as a near dead-certainty less than 3 weeks ago.
Real interest rates, as indicated by the yield on 10-year TIPs, have this week fallen to the most negative since New Year, predicting a loss of purchasing power for Dollar bond holders of almost 0.9% per annum over the next decade.
On a rolling 1-month basis, gold's daily price correlation with 10-year TIPS yields has this week turned negative for the first time since mid-January.
That correlation has been negative almost 4/5ths of the time over the last 15 years, meaning that gold prices have tended to rise when TIPS yields fell, and typically giving a reading of minus 0.48.
That figure would read +1.0 if gold moved together with TIPS yields, or -1.0 if they moved perfectly opposite. 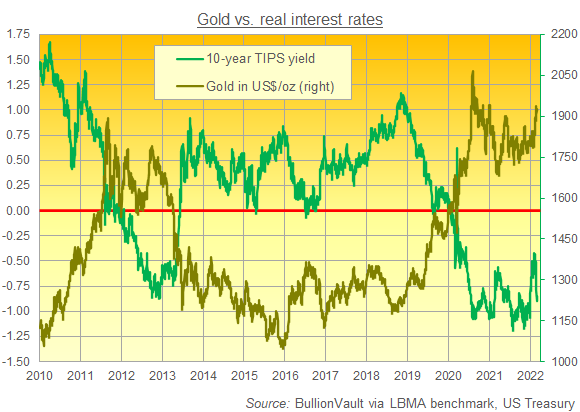 A week after Moscow's invasion of Ukraine spiked gold prices to new record highs in Euro terms, Putin today said Russia will defeat "militants of nationalist armed groups" in a phonecall with France's President Macron.
Gold priced in Euros today held around €1740 per ounce, some €30 below last Thursday's spike to new records.
While a second round of talks was scheduled for Ukrainian and Russian officials, "There was nothing in what President Putin told us that should reassure us," said an aide to Macron.
"[Our] expectation...is that the worst is to come, given what President Putin told [us]."
Gold-backed ETF investment funds have seen heavy inflows since Russia's invasion began, snapping a period of low-to-no growth since New Year.
European as well as US-listed gold ETFs grew sharply in the week to Monday, while the giant SPDR Gold Trust (NYSEArca: GLD) expanded by another 1.3% on Wednesday alone, with the growth in shares in issue needing 1,050 tonnes of bullion backing, the most since June 2021.
Silver's giant US-listed iShares ETF (NYSEArca: SLV) in contrast shrank again, with the number of shares in issue falling to the lowest in more than 2 weeks.
Silver prices today fell back towards $25 per ounce, almost 60 cents below last Thursday's spike to 6-month highs.
The civilian death-toll from Russia's invasion of Ukraine rose Thursday as Moscow's forces intensified their air-attacks and shelling of cities and towns across the country.