END_OF_DOCUMENT_TOKEN_TO_BE_REPLACED

GOLD PRICES set new 2.5-year Dollar lows on Wednesday before rebounding in terms of all major currencies as the Bank of England stepped in and bought UK government debt in a surprise intervention, calling the slump in Sterling and Gilt prices a "dysfunction" while trying to suppress Gilt yields following new Chancellor Kwasi Kwarteng's near-universally decried deficit-tax-cutting budget of last Friday.
Crude oil ticked higher and natural gas repeated yesterday's 5% rise for European December contracts, but other commodities fell alongside global stock markets as the Dollar pushed the Euro below $0.95 to hit fresh 2-decade highs on its trade-weighted major currency index.
With the Dollar price of gold then bouncing $15 from a new 2.5-year low of $1615 before dropping back to $1625, the Euro price of gold rose back above €1700, some 13.4% higher from this time last year.
Gold for UK investors meanwhile jumped back to £1540 following the UK central bank's sudden news, up 20.0% from this point in September 2021 but £40 below this week's re-touch of gold's all-time GBP high.
The UK gold price in Pounds per ounce has now touched that record £1580 level 3 times, first during the Covid Crisis of summer 2020, then during the Russian invasion of Ukraine crisis in March 2022, and then once again this Monday during the sudden UK government debt crisis. 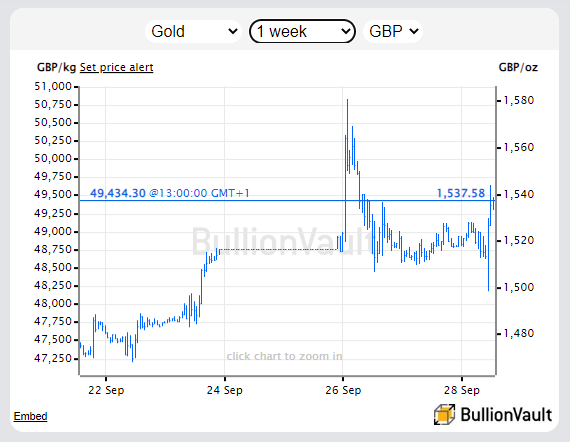 Having failed to raise overnight UK rates by the 0.75 points widely expected at last Thursday's regular policy meeting, "Were the significant repricing of...long-dated UK government debt...to continue or worsen, there would be a material risk to UK financial stability," said the Bank of England today.
"This would lead to an unwarranted tightening of financing conditions and a reduction of the flow of credit to the real economy," it went on, promising to detail the size of its intervention "shortly".
Prices for 30-year UK Gilts had fallen so hard overnight that the yield demanded by new buyers jumped above 5% per annum, up more than 2 whole percentage points to the highest since 2002.
Today's BoE announcement saw that drop 75 basis points before rising back above 4.5% – itself a fresh 11-year high when reached in Monday's Gilt crash.
This marks "a very successful and important intervention...the right thing to do," according to former deputy governor of the Bank, now Professor Sir Charlie Bean. 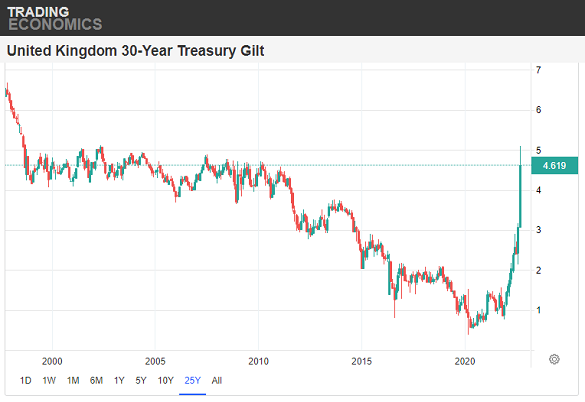 "This is......bad," says the Financial Times' economics editor, in contrast.
"It is actually incredible," adds a Conservative MP quoted by a Sky News reporter.
"The UK central bank has had to step in to protect the UK from the actions of the UK's own government!"
Having cut tax without cutting spending in Friday's "mini budget" to need an additional £1 by April for every £7.65 already owed to Gilt market investors, Kwarteng himself meantime held talks with leading investment-bank and other financial-firm bosses in what the BBC calls a "crisis" meeting.
With lenders unable to price new home-loans amid the chaos in UK borrowing costs, almost 1-in-4 mortgage products were withdrawn by lenders on Tuesday according to MoneyFacts, slashing the total to just half the number available at the start of December, before the Bank of England finally raised its key overnight rate from 0% to reach 2.25% last week.
UK inflation in August ran just below 10% per year.
"Given elevated inflation pressures in many countries, including the UK, we do not recommend large and untargeted fiscal packages at this juncture," the International Monetary Fund said overnight,, feeling it necessary to release what pundits called a "scorching" statement on Friday's deficit announcement despite having "engaged with the [UK] authorities" on the matter and warning that household inequality will widen.
"This is the IMF self-declaring as a left-wing body," said one pro-Government UK pundit on Wednesday.
"You really think this is about tax cuts?" said another.
"What the Sterling sell-off may have reflected...is the belief that this budget has made a Labour victory more likely."
"[But] large unfunded tax cuts will lead to structurally higher deficits amid rising borrowing costs, a weaker growth outlook and acute public spending pressure stemming from the pandemic and a decade of austerity," says ratings agency Moody's, cutting its 2023 GDP growth forecast for the UK from 0.9% to 0.3% and warning it may downgrade the UK's credit status.
"A sustained confidence shock arising from market concerns over the credibility of the government's fiscal strategy...could more permanently weaken the UK's debt affordability."
With Wednesday's rally in UK Gilt prices and the retreat in Gilt yields bucking another wide sell-off in European and other rich-world government bonds today, "Longer-dated sovereign notes in most developed markets are starting to look appealing," Bloomberg says, quoting US investment giant J.P.Morgan and noting that "yields are at levels last seen in 2010."