END_OF_DOCUMENT_TOKEN_TO_BE_REPLACED

GOLD TRADING in London's wholesale market saw bullion slip against a falling US Dollar on Wednesday, but the gap with New York's Comex futures price evaporated – down to zero from March's Covid Crisis spike of $100 per ounce – as global stock markets rose yet again.
UK 'core' inflation data showed more strength than expected for June at 1.4% per year, while US industrial production showed 5.4% monthly growth, beating analyst forecasts.
"People use gold as a hedge against inflation," Canada's CBC quotes Karl Skogstad, mining economist and assistant professor at Lakehead University in Ontario.
"Central banks have been printing money to deal with a large [government] deficit for a long time. People go through these periods where they say, 'I think this is getting out of hand'."
Ahead of Thursday's meeting of the European Central Bank – expected to leave the 19-nation Eurozone's record QE and negative rates policies unchanged – the Dollar today slipped to its weakest against the single currency Euro since before the Covid Crisis broke in mid-March.
That pushed gold in Euros down to 1-week lows beneath €1580 per ounce while the Dollar price held above $1800, a new 9-year high when reached last Wednesday.
Major US gold-backed ETFs the GLD and IAU both expanded again on Tuesday, extending their 15-week run of net investor inflows.
In contrast, betting on the Comex derivatives exchange's August future – currently the most active contract – fell, shrinking 3.5% as traders moved their positions into later-dated contracts, growing open interest in the December future by 11.0%.
"The cost to roll the active Comex gold future into the December contract is $28/oz," notes strategist John Reade of the mining industry's World Gold Council, comparing live prices for bullish traders wanting to sell August so they can buy December.
"Although this is a little less than the extreme seen earlier in July, its still a very large cost. Do this 4 times a year and that's a 6% annual holding cost!"
With 2 weeks still to run on the Comex August future, the gap between New York's most active gold futures contract and the price of physical gold traded in London's spot market – known as 'over-the-counter' or OTC – meantime shrank to barely 20 cents per ounce on Wednesday.
That contrasts with late-March's spike to $100 per ounce, when the UK's Covid lockdown and the closure of 3 major Swiss refineries fed speculation that bullion banks and other industry traders using Comex to hedge the value of their physical stockpiles wouldn't be able to make delivery into New York.
"Looking at monthly net gold flows into physically backed ETFs," says the World Gold Council's Reade, "the increased proportion attracted by North American funds since the OTC-Comex dislocation in March is apparent." 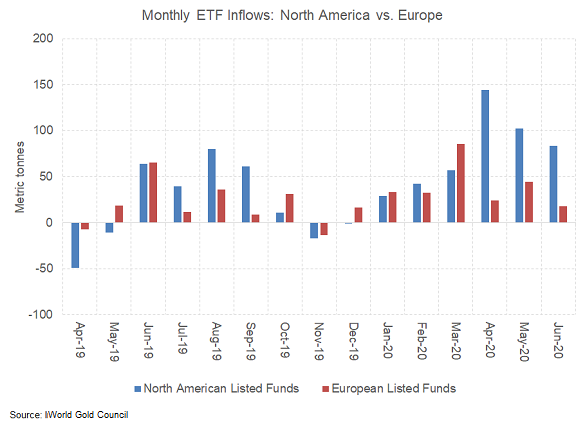 Physical demand outside of Western investment markets however continued to hold weak on Wednesday, with gold prices in Shanghai trading $25 per ounce below London OTC quotes.
That was the widest discount in 2 weeks for bullion landed in China, the metal's No.1 consumer market.
Daily trading volumes at the Shanghai Gold Exchange have risen just 2% so far in 2020 from last year, according to data compiled by the World Gold Council.
Gold trading through London OTC – as reported by members of the London Bullion Market Association – has in contrast risen by more than 35%, reaching an average $61.0bn per day in 2020 so far.
That has outstripped the CME's Comex gold volume by more than one-tenth, reversing the position across 2019 as a whole.
For June, LBMA Trade Data show an average of $59.2bn per day, with the Comex down to $34.9bn.