END_OF_DOCUMENT_TOKEN_TO_BE_REPLACED

GOLD TRADING in London saw prices rally but fail to reach yesterday's 1-week high at $1240 per ounce against a rising US Dollar on Friday, while Western stock markets fell yet again with commodities as the European Union failed to find common ground on its migrant crisis or the looming Brexit referendum in the UK.
Continuing talks with EU counterparts in Brussels, UK prime minister David Cameron said there was "progress" but "still no deal" he can put the British people in a referendum on Brexit from the economic union, perhaps as soon as this June.
Heading for its first weekly drop in five, the gold price slipped back to $1223 – down 1.2% from last Friday's finish – as New York trading began.
Gold trading has seen "an explosion of activity" in 2016 thanks to "collapsing real [interest] rates, the spread of central-bank negative deposit rates, and financial market instability," says Chinese-owned investment and bullion bank ICBC Standard Bank's Tom Kendall.
Shanghai's stock market slipped Friday, but closed the first trading week of the new Year of the Monkey some 3.5% higher.
Crude oil however reversed another 2% of this week's sharp bounce, trading back down towards $30 per barrel of WTI, while European stock markets fell over 0.5%, with Germany's Dax index dropping for the 22nd out of 35 sessions in 2016 to date.
Wholesale gold trading prices against the Euro jumped overnight to 10-month highs at €1117 per ounce.
Gold priced in British Pounds also rose, heading for its 7th consecutive weekly gain above £860 per ounce.
"The EU's clearly difficult negotiations with Great Britain over concessions to the UK are no doubt playing a role," says the commodities team at German financial group Commerzbank.
"If British Prime Minister Cameron's demands are not met, this could lead in a worst-case scenario to Great Britain leaving the EU (Brexit)."
Looking at the policy of negative interest rates now applied to banking reserves held at the ECB, Bank of Japan and Swedish Riksbank, "Leave a million dollars with a bank, and in a year, you get only something like $990,000 back," Bloomberg News today quotes Swiss money manager and Asia-based finance author Marc Faber, publisher of the Gloom, Boom & Doom Report.
"I would rather want to own some solid currency, in other words gold."
"Even if gold's rally proves only a temporary phenomenon," writes US financial group BNY Mellon's chief strategist Simon Derrick, "it still speaks a great deal about how fragile investor faith in central banks has become."
The giant SPDR Gold Trust (NYSEArca:GLD) grew again on Thursday, taking the inflow of bullion needed to back its shares so far this year to 71.3 tonnes – the heaviest inflow over 32 trading days since September 2012. 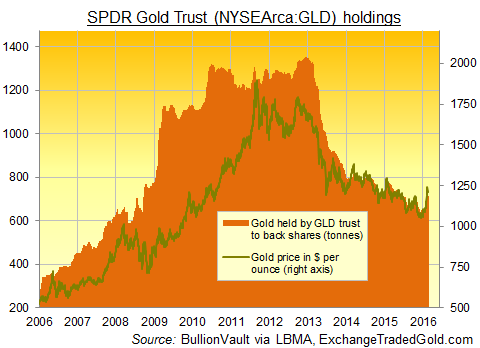 That took the GLD's total holdings up to 713 tonnes, a 6-year low when first reached at the end of 2014 but now recovering some 13% from last December's new 7-year low.
"Asian physical demand [in contrast] has been notable by its absence," Kendall at ICBC Standard Bank goes on, and so "$1225 feels rich right now.
Call skew – meaning the higher prices being paid for bullish than bearish derivatives bets – "looks excessive," the note says, "given the weakness of physical demand.
"The floor price for gold has probably risen and the bear is back in hibernation but it is way too soon to be talking about a new bull market."