END_OF_DOCUMENT_TOKEN_TO_BE_REPLACED

GOLD PRICES failed to hold a rally back above $1900 per ounce in Asian trade Thursday, edging back $20 from yesterday's 20-week high in London after the giant GLD gold ETF shrank and longer-term interest rates rose amid further 'taper talk' from senior US central bank officials.
"If my expectations about economic growth, employment and inflation over the coming months are borne out," said Federal Reserve member Randal Quarles, vice-chair for supervision, "it will become important to begin discussing our plans to adjust the pace of asset purchases at upcoming meetings."
New US data on Thursday said the world's largest economy saw stronger pricing pressures in the first quarter of 2021 than previously estimated, with the GDP price index rising at its fastest annualized pace since spring 1990.
Durable goods orders also beat analyst forecasts for April, while new and continuing jobless benefit claims for last week both fell. 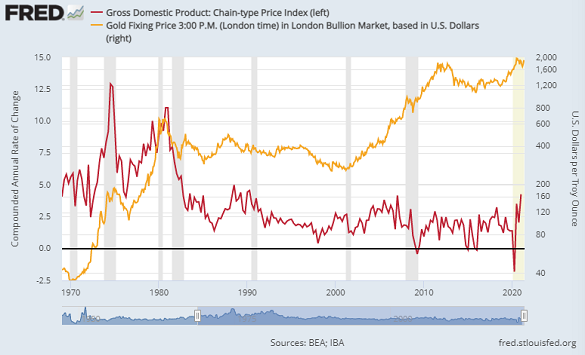 Ten-year US Treasury debt fell in price for the 5th session running, edging 10-year yields up to 1.61% per annum, and gold priced in the Dollar fell to $1893 per ounce.
Over in the 19-nation Eurozone in contrast, "The conditions that we see today do not justify reducing the pace of [bond] purchases," said Fabio Panetta of the European Central Bank – which created and spent almost €120 billion under its various quantitative easing programs in April – in an interview published Wednesday.
"A premature withdrawal of policy support would risk suffocating the recovery before it becomes self-sustained."
Euro gold prices today slipped from near 5-month highs but held above €1550 per ounce, a new record high when first reached last June.
The UK gold price in Pounds per ounce also fell back to halve the week's previous 1.6% gain, trading just below £1340.
"Tightening too early would be a much costlier mistake than tightening too late," agreed Gertjan Vlieghe, a fellow of London Business School and a policymaker at the Bank of England – now holding 1/3rd of the UK government's outstanding debt, equal to 30% of GDP – in a speech today.
"The past two decades has taught us that premature tightening can lead to even more easing later, with below target inflation."
European government bond prices slipped meantime, edging 10-year UK borrowing costs back up towards this month's 2-year highs above 0.81%, while Germany's 10-year Bund yield rose over 2 basis points  from yesterday's 2-week low of -0.20% per annum.
Commodities were mixed, with copper rallying after retreating from this month's new all-time highs while crude oil dropped.
Silver fell back harder than gold prices, erasing all but 10 cents of the week's prior $0.67 gain to trade at $27.65 per ounce.
Silver yesterday recorded only its 8th daily benchmark above $28 per ounce in London of the last 8 years, 5 of them in August-September 2020 and 2 now so far this month.
Wednesday's price jump left the giant SLV silver-backed ETF unchanged in size at its largest in 8 weeks.
Giant gold-backed ETF the GLD shrank by 0.2%, seeing its first investor outflow in 5 trading days.
After the US Treasury raised $61 billion at a "strong" auction of new 5-year debt on Wednesday, Washington will ask bond investors for a further $62bn in 7-year debt today.
The Federal Reserve's reverse repurchase facility "showed volume of $450.2 billion on Wednesday," says Reuters, "representing the third largest" volume for excess cash being lent to the US central bank at 0% cost since the facility was launched in 2013.
The Dollar steadied Thursday after hitting new 2-year lows versus the Chinese Yuan and nearing multi-year lows on its index against the rest of the world's major currencies.