END_OF_DOCUMENT_TOKEN_TO_BE_REPLACED

GOLD PRICES headed into Friday afternoon's London benchmarking auction around $1754 per ounce, reversing the last 2 weeks' drop as global stock markets extended their worst run of daily losses since the Pandemic Panic of February 2020.
Wall Street yesterday sealed its first losing month of 2021 and its worst calendar quarter since the Covid Crisis began in early 2020.
With China shut for the National Day holidays – marked by yet another incursion of PLA fighter jets into Taiwan's air space – Australian stocks today lost 2.0% and Japanese shares 2.3%, closing at 3-month and 1-month lows respectively.
The EuroStoxx 600 index then sank 1.5% at the start of Frankfurt and Paris trade as new data put inflation in the 19-nation Eurozone at a 13-year high of 3.4% – led by energy costs jumping 17.4% per year – and the European Union suspended trade talks with Australia over its controversial Aukus defense deal with the UK and US.
European shares then cut that loss to 0.3% but headed for the lowest weekly finish since mid-June, putting the MSCI World Index of major-economy equities on track for a 6th consecutive daily loss, the worst run since February 2020's Pandemic Panic. 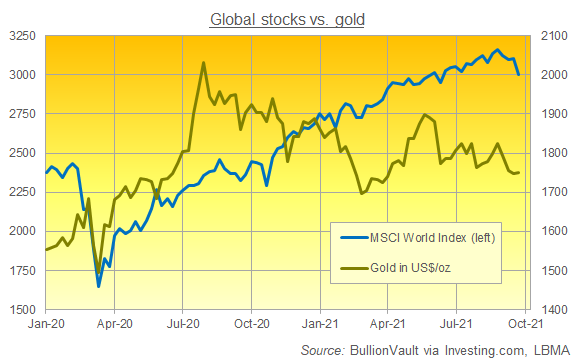 Emerging markets fell less steeply to less notable lows however, with the BSE Sensex in gold No.2 consumer nation India down Friday to a 2-week low only 2.2% beneath Monday's fresh all-time high.
Gold No.5 consumer and Nato alliance member Turkey saw its Borsa Istanbul 100 index trade flat for the day by lunchtime, unchanged for 2021 to date after President Recep Tayyip Erdoğan met Russia's Vladimir Putin to confirm Ankara's purchase of S-400 missile systems and discuss buying further military hardware including warplanes and submarines.
Thursday's 1.2% drop in New York's S&P500 only just comes in the worst 100 days of the last 5 years.
It saw Comex gold futures volumes jump to the heaviest in 2 weeks, with volumes in options – more leveraged again as a play on future prices – reaching the heaviest since 17 June, when gold bullion suffered its 8th worst-ever daily plunge following what pundits and analysts called "hawkish" comments on monetary policy from the US Federal Reserve.
Fed taper-talk and interest-rate forecasts have put government and corporate bondholders on track for their worst annual loss so far this century according to the Bloomberg Global Aggregate Index.
But with Western governments continuing to issue new debt at a near-record pace, investors are also lapping up unprecedented quantities of corporate debt and equity issuance, the Financial Times reports.
"The feeding frenzy, including more than $1tn worth of share sales and nearly $4tn of bond issuance, involves the biggest names in the corporate world," says the FT, "including Apple, Walmart, Baidu and Volkswagen."
In contrast to Comex gold speculation, Thursday's reversal in gold prices left the SPDR Gold Trust (NYSEArca: GLD) unchanged in size at its smallest since April, heading for a 2nd consecutive week of net liquidation by the giant gold ETF's shareholders.
The giant iShares Silver Trust (NYSEArca: SLV) meantime expanded by 1.6% yesterday as silver prices rallied, putting it on track for a 2nd week of net investor inflows.
With global stock markets heading for their steepest weekly fall since January, down over 3.1% from last Friday ahead of the US opening, silver prices like gold reversed the last 2 weeks of losses for US investors, trading at $22.40 per ounce after touching 14-month lows a whole dollar lower on Wednesday.
While gold priced in the Dollar reversed last week's 1.6% drop, the UK gold price in Pounds per ounce today headed for its best Friday finish in four, albeit 1.0% below an overnight spike to £1307.
Gold prices for Euro investors also showed strong week-on-week gains, heading for the highest Friday finish in three at €1510.