END_OF_DOCUMENT_TOKEN_TO_BE_REPLACED

GOLD and SILVER PRICES rallied Wednesday from yesterday's spike down to 4-week lows as Russian continued shelling Ukraine despite offering to ease off amid peace talks in Turkey, while Western stock markets fell and analysts picked over Tuesday's brief inversion of the US yield curve – an indicator of economic recession ahead.
The gap between 10-year Treasury bond yields and 2-year yields steepened to 0.07 percentage points today after dipping very slightly below zero.
Gold rallied to $35 per ounce from Tuesday's spike down to $1890, while the price of silver – which finds around 55% of its demand from industrial and technological uses – rebounded by $1 from its plunge to $23.98.
"Some investors and economists say the gap between three-month and 10-year yields is a better guide [to recession], and that is far from inverting," says the Washington Post, adding that US banks are currently "lending freely" according to the Federal Reserve's survey of loan officers.
"Their stock prices are [also] rallying" rather than suggesting caution or concern, the Post goes on.
Even so, and with the interest-rate market now expecting a half-point hike from the US Fed at its May meeting, "The movements in the twos and the tens are a reflection that the market is growing nervous," an analyst tells Reuters.
"The Fed may not be successful in fostering a soft landing."
"The time delay between an inversion and a recession tends to be...anywhere between 6 and 24 months," says another strategist.
"So it's really not something that is actionable for the average folks." 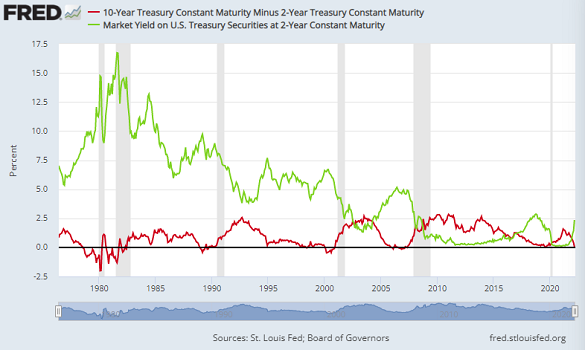 10-2 yield curve inversions, so called because longer-term rates are typically higher than short term rates, have preceded each of the last 6 recessions in the US, including the deep but short-lived Covid Crash of spring 2020.
Gold and silver prices show no distinct and repeated pattern against yield curve inversions nor during US recessions.
Recent US data show economic activity held solid in February on the Chicago Fed's index, while the trade deficit in goods held near January's new record high as job openings rose back towards winter 2021's all-time high.
Durable goods orders sank last month however in the face of inflation hitting fresh 4-decade highs, while business investment fell for the 1st time in a year and the number of pending home sales dropped hard after house prices rose by 19.1% per year in January on the Case-Shiller index, just shy of last summer's all-time record pace.
With 30-year fixed mortgage rates now at 4.5%, the most costly since spring 2019, mortgage applications have fallen so far in March on MBA data.
Ahead of Friday's non-farm payrolls estimate from the Bureau of Labor Statistics, new claims for jobless benefits fell to their lowest weekly total since September 1969 in the week-ending 19 March.
Manufacturing and service sector reports for March will be released Friday and Monday respectively, but preliminary PMI surveys from the Markit data agency showed activity growth accelerating this month.