END_OF_DOCUMENT_TOKEN_TO_BE_REPLACED

GOLD PRICED in terms of sister metal silver fell near its cheapest in 4 years in London's bullion market Friday, despite rising near 3-week highs of its own in the aftermath of silver's dramatic jump after users of the Reddit chatroom called on other readers to buy shares in the cheaper precious metal's largest ETF trust.
"[Let's] corner the market [and] f**k the banks," said the anonymous post late Wednesday, urging a repeat of the "short squeeze" forcing a surge in the price of a raft of US-listed stocks against which speculative hedge funds hold massive bearish bets.
The giant iShares Silver Trust (NYSEArca: SLV) gapped sharply higher at Thursday's New York opening, leading a jump in Comex futures and options betting as well as spot silver bullion prices. But the fund in fact saw net liquidation by investors overall by last night's closing.
Rising to $1873 per ounce Friday as the US Dollar struggled to extend its rally on the currency market, gold bullion cut its loss for the month to date below $20.
That still left New Year 2021 as the first January since 2011 when the gold price failed to make a monthly gain.
Silver prices meantime extended Thursday's 5.3% jump to trade over one Dollar higher again at $27.50 per ounce, its highest since January 6th.
Together, that pushed the Gold/Silver Ratio – a simple measure of the two former monetary metals' relative pricing – down below 69, its lowest since 2 March 2017 and only its second daily reading below the 70-level since April of that year. 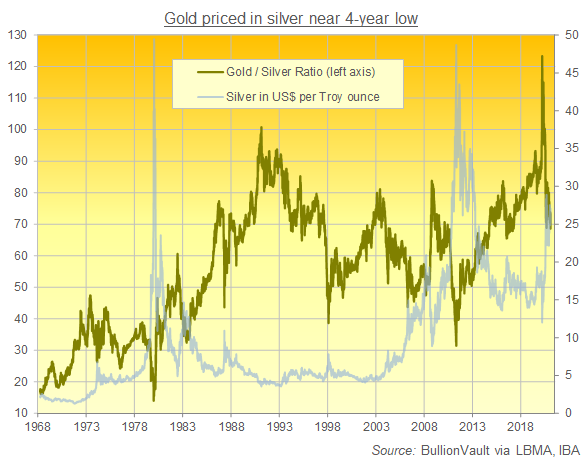 "Going forward," said specialist consultancy Metals Focus in a note published Wednesday, before the Reddit Ramp, "there is plenty of room for a further contraction toward the low 60s as we progress into 2021."
Looking at the likely bump in silver's industrial demand – led by new green energy and 5G telecoms installations – "Silver's higher beta should also raise its investment appeal," says the analysis, pointing to silver's typically greater volatility than gold's plus "abundant liquidity in financial markets and investors’ growing appetite for returns in the wake of low [bond] yields.
"Unlike gold, silver is currently trading well below its all time high in 2011 of over $50. Once the expected rally in the precious metals complex resumes, this may well encourage aggressive tactical buying from those who believe silver remains undervalued relative to gold."
Peaking amid last March's Covid Crisis at a record daily high of 125 ounces of silver per 1 ounce of gold, the ratio has averaged 80.6 across the last half-decade, and 61.4 across the 2 decades before that.
On an annual average, 2020 saw the gold price in terms of silver breach its all-time historic peaks of the 1930s' depression and the early 1990s' recession.