END_OF_DOCUMENT_TOKEN_TO_BE_REPLACED

GOLD and SILVER PRICES fell hard yet again on Thursday, dropping near 2-week lows against most major currencies even as longer-term interest rates eased back in the bond market but global stock markets extended their rally despite Russia threatening Ukraine's western supporters with a new nuclear-capable missile.
Gold prices dipped below $1940 – down more than 3% from Monday's 6-week high – while silver touched $24.58 per ounce, also its lowest since 8th April and more than 6% below Monday's peak.
Interest rates on longer-term US government bonds meantime held below this week's fresh 40-month high, with the 10-year Treasury yield offering new buyers 2.85% per annum.
Inflation-protected Treasuries also rose in price, edging down the 10-year TIPS yield – against which gold prices show a strongly negative correlation – to minus 0.11% after touching 0.00% for the first time since March 2020's Covid Crisis on Tuesday.
Last time 10-year TIPS yields weren't negative, gold was trading below $1500 per ounce.
Silver cost $12.50 per ounce. 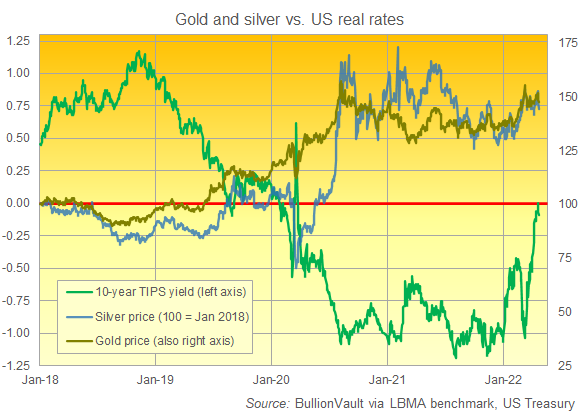 "So far, gold has been holding its own pretty well against the increased yields and interest-rate expectations," says bullion-market analysis from German financial services group Commerzbank.
"Rising bond yields and real interest rates make gold less attractive as an alternative investment because it does not yield any interest itself...[but] demand for gold as a safe-haven amid the Ukraine war and as a store of value in view of high inflation has been and remains solid."
Calling the Russian seizure of now-destroyed port city Mariupol a "liberation", President Putin – accused of being "maximally cruel" by Ukraine's President Zelensky – last night hailed the test launch of new nuclear-capable, intercontinental missiles.
"This truly unique weapon," Putin said of the Sarmat system, "will provide food for thought for those who, in the heat of frenzied aggressive rhetoric, try to threaten our country."
Morgues near Kyiv currently hold 1,020 bodies following Russia's retreat from around Ukraine's capital – "only civilians" and no soldiers according to deputy prime minister Stefanishyna.
Moscow meantime expelled diplomats from 3 of its Baltic neighbors today, retaliating against the week's earlier moves by Estonia, Latvia and Lithuania to expel Russian consulate staff.
"Precious metal investors still see compelling reasons to hold on to the shiny metal," says a note from Canadian brokerage T.D.Securities.
"Fed speak may remain a focus in the near-term, with the rates market proving sensitive to hawkish signals recently. But safe-haven flows continue to provide an impressive offset."
Over 95% of betting on the Federal Reserve's next policy meeting – now less than 2 weeks away – sees the US central bank raising its key interest rate by half-a-percentage point, the first such hike in more than 2 decades, with another half-point hike seen as a 2-in-3 shot for the June meeting as well.
Those 2 hikes would still only take the Fed Funds rate to a ceiling of 1.5% per annum versus Consumer Price inflation running at 8.5% per year in March.