END_OF_DOCUMENT_TOKEN_TO_BE_REPLACED

GOLD and SILVER plunged and then recovered that loss lunchtime Wednesday in London as new US data beat analyst forecasts for consumer-price inflation with the highest reading since the Lehman Brothers' crash of 13 years ago.
Headline inflation in the world's largest economy jumped to 4.2% per year in April, the highest since September 2008 and beaten by only 7 monthly readings in the decade prior to that.
So-called 'core' inflation – excluding food and fuel due to their volatility – meantime hit 3.0% per annum, its fastest pace in 25 years.
The news saw longer-term interest rates spike in the bond market before easing back to put 10-year US Treasury yields one basis-point lower for the day at 1.61%.
Already back to flat for the week so far at $27.40 per ounce, silver prices lost 20 cents in 1 minute, only to regain them again.
Gold prices meantime sank $10 before recovering and then rising to $1840 per ounce, coming within $5 of Monday's 12-week high. 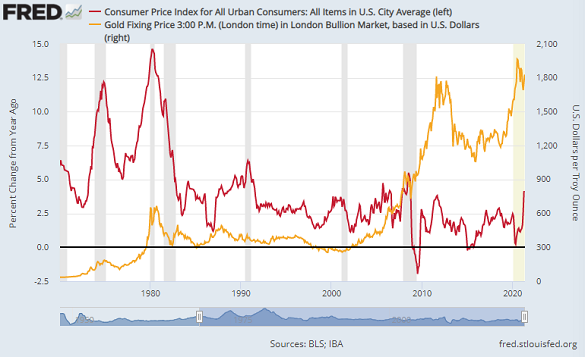 "The outlook is bright, but risks remain, and we are far from our goals," said US central bank governor Lael Brainard yesterday, repeating the Federal Reserve's commitment to zero overnight interest rates and record levels of QE bond purchases.
"As the economy reopens fully and the recovery gathers momentum, it will be important to remain patiently focused on achieving the maximum-employment and inflation outcomes in our guidance."
Neither the giant GLD or smaller IAU gold-backed ETF trust funds saw any material change in size on Tuesday.
The iShares Silver Trust (NYSEArca: SLV) in contrast shrank for the 4th time in 5 trading days, down by 0.3% to its smallest since mid-January – two weeks before the reddit/WSB #silversqueeze ramp on social media – as shareholders sold out of the ETF.
" UK economy picks up as lockdown restrictions ease," says the BBC meantime after new data said a very poor first quarter ended with a monthly upturn.
"More good news this morning on economic developments/prospects," agrees Mohamed El-Erian, chief economic adviser at German insurance giant Allianz, noting an upgrade to European Commission GDP forecasts for 2021 and 2022, and also pointing to how "UK growth rebounded in March."
But about 1.8% of total UK economic output recorded for Q1 came from government-funded vaccination and test-and-trace programs, notes economics professor Jonathan Portes of the Office for National Statistics' data.
The ONS also reports that "the implied price of government consumption" was the prime driver of a sharp 4.8% jump in economy-wide costs in Q1, as the UK state continued to pay public-sector wages but many services were shut, with offices and schools running reduced hours online.
Calling today for an official enquiry into his own government's handling of the Covid Catastrophe, UK Prime Minister Boris Johnson has failed to pay a court judgement for unpaid debt worth £535 issued last October, news magazine Private Eye has found.
Internet retail monster Amazon meantime won a court battle today in Brussels against a European Union order to pay €250m ($300m) in unpaid tax to member-state Luxembourg, where its regional business is registered.
Amazon had sales income of €44bn in Western Europe last year but – under what the EU calls a "sweetheart deal" with the tiny nation – paid no corporation tax.