END_OF_DOCUMENT_TOKEN_TO_BE_REPLACED

GOLD PRICES whipped $15 around 2-week highs Thursday lunchtime in London as stock markets fell and longer-term borrowing costs rose after new data said inflation in the USA last month accelerated once again to reach its fastest pace in 4 decades, "driven by food, electricity, and shelter" according to the Bureau of Labor Statistics.
So-called 'core' inflation also leapt however – even though it excludes 'volatile' fuel and food prices – jumping from 5.5% to 6.0% per year, its fastest pace since summer 1982.
Overall, the headline cost of living on the US consumer price index rose 7.5% before seasonal adjustments, the fastest annual pace according to BLS data since February 1982.
On a 5-year horizon, that puts CPI inflation at 3.0% per year, its fastest half-decade pace since the late-2008 Lehman Brothers' banking crash followed crude oil hitting a record $150 per barrel. 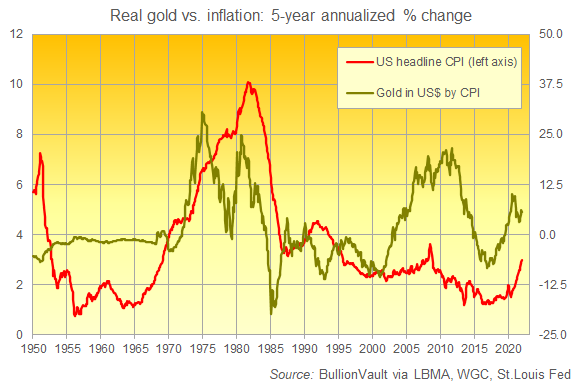 Ahead of today's data, gold priced in the Dollar had reached $1835 per ounce, its highest since the US Federal Reserve's end-January meeting, deemed by analysts, pundits and traders to show a 'hawkish' tilt on raising interest rates in 2022.
Silver already traded 50 cents lower from 2 weeks ago at $23.35 per ounce, whipping around that level on the CPI inflation data to hold unchanged as New York trading began.
Gold meantime slipped to $1828 for US investors, but held firm for UK and Euro traders above £1350 and €1600 respectively.
With analysts, pundits and traders all expecting a strong CPI print to encourage more aggressive rate hikes from the US Federal Reserve at its policy meeting in March, New York stock-market futures fell on the US inflation news, and European bourses erased an earlier gain.
Fixed-income bond prices also fell across the board, driving the yield offered to new buyers of the UK or Germany's 10-year debt up to fresh 3-year highs.
Ten-year US Treasury yields hit 1.99% per annum, their highest since August 2019.
Borrowing costs in China's "junk bond" market had earlier edged lower overnight amid rumors that asset managers specializing in "distressed" debt are buying to support prices, most especially in China's heavily indebted and fast-weakening real estate sector, urged on by government policy makers.
Analysts expect the People's Bank of China to cut its key interest rate next week to try boosting economic growth, but "the room [for action] may get smaller after the Fed starts to raise [US] interest rates," says one Shanghai stock broker's economist.
New lending to private-sector borrowers in China – the world's 2nd largest economy – more than tripled from December's figure to a fresh monthly Yuan record in January, new data said Thursday.
Japan's central bank is also pushing back against the rising cost of borrowing, surprising the market on Thursday by reconfirming its offer to buy unlimited quantities of Tokyo's 10-year government bonds with newly-created money to keep the annual yield it gives new buyers close to 0%.
With consumer-price inflation in the world's 3rd largest national economy rising to only 0.5% this New Year after decades of soft and deflationary pricing, Bank of Japan governor Haruhiko Kuroda said that ending the BOJ's ultra-loose monetary policy won't be up for debate until at least April 2023, when his term will end.