END_OF_DOCUMENT_TOKEN_TO_BE_REPLACED

GOLD PRICES slipped to 1-week lows in London trade Wednesday as global stock markets rose to fresh records, crypto-currencies rallied, and longer-term interest rates pushed higher ahead of today's policy statement and forecasts from the US Federal Reserve.
Crude oil rose again but wider commodity markets slipped.
Silver prices also fell to 1-week lows before rallying 15 cents to $26.00 per ounce, unchanged from last Friday's finish.
With pundits and traders awaiting Fed chair Jerome Powell's press conference for any hint of tighter monetary policy to come, 10-year US Treasury yields rose to 1.63% per annum, the highest borrowing cost in 2 weeks and extending yesterday's 5-basis point jump.
The steepest daily rise so far this month, that move came as the US government raised another $62 billion in new debt with an auction of 7-year bonds.
But this week's rise in Washington's borrowing costs hasn't so far hit inflation-linked bonds, with the price of 10-year TIPS rising Wednesday to push down their yield to -0.79% ahead of the Fed's announcement – the lowest level since late-February.
Gold prices typically show a much stronger inverse relationship with TIPS yields than they do with rates on conventional bonds.
On a weekly basis, the 13-week correlation of gold with 10-year TIPS yields has read -0.73 on average over the last 3 years, against -0.44 with nominal 10-year rates. 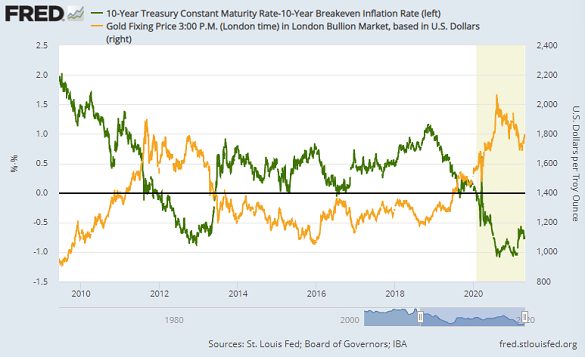 Gold prices today dipped to $1768, down almost $30 per ounce from last Thursday's 8-week high.
"The upward move in US Treasury yields," Reuters quotes analyst Jens Peter Sorensen at Danish bank Danske, "is driven by expectations for a more upbeat Federal Reserve committee as well as the solid rise in [US] consumer confidence" – now giving its highest reading in 14 months.
With conventional US bond yields rising, the Dollar also rallied again on the FX market Wednesday after losing almost 3% against its major peers so far in April.
Pushing the Chinese Yuan further down from end-March's 4-month high, the rally in the Dollar meant premiums for gold landed in Shanghai – over and above comparable prices in London – slipped to $7.75 per ounce.
That incentive for new bullion imports to China, the No.1 gold consumer market, last year flipped to a record discount as Covid lockdowns shut retail stores, festivals and family events, crushing demand.
Jewelers in India – gold's No.2 consumer market – have meantime "been reducing purchases because of weak retail demand," says LiveMint, "and demand could remain soft over next few weeks amid rising Covid cases."
Starting after the Government of BJP Prime Minister Narendra Modi declared victory over the virus, India's current Covid crisis has now seen corporate borrowers default on more than $760 million-worth of debt so far in 2021, a 4-month record according to Bloomberg.
"Traders expect more" the newswire says, as the country's record-high infections and death-toll shut social and economic activity once again.
So-called crypto-currency Bitcoin meantime rallied above $55,000 – a new record high when first reached in late-February but still 15% below mid-April's current peak – while comedy-crypto Dogecoin rallied to 32 cents, recovering half of last week's 65% plunge from early April's sudden 9-fold surge.