END_OF_DOCUMENT_TOKEN_TO_BE_REPLACED

GOLD and SILVER fell further in London on Thursday, sliding against a surging US Dollar and extending the drop started when US central bank chair Jerome Powell roiled global markets overnight by saying the Fed will tighten monetary policy sooner and faster in the face of inflation running at multi-decade highs.
Longer-term interest rates rose back towards this month's 2-year highs as prices in the bond market dropped, but while commodities also fell, crude oil hit new 7-year highs amid fresh saber-rattling between Moscow and the Nato alliance over Ukraine, with Washington and Berlin telling Russia that the Nordstream 2 gas pipe won't open if it chooses to invade its neighbor.
As gold priced in the Dollar fell towards $1800 per ounce, Asian stock markets closed Thursday sharply lower but European bourses rallied around lunchtime, showing a 0.3% gain.
New York stock markets had yesterday erased an earlier 2% rise – sending the S&P500 lower for the 12th in 16 sessions since New Year 2022's fresh all-time – as Powell acknowledged that inflation at 7% is running far above the Federal Reserve's 2% annual target, with growth and the labor market also strong.
Answering questions from journalists after the Fed's official policy statement left overnight interest rates unchanged at 0% until March, Powell then hinted that rates might now be raised at every further policy meeting in 2022.
Betting on end-December's Fed rates now sees 5 hikes as the top likelihood, according to the CME derivatives exchange's FedWatch tool, with the odd of 6 or more hikes now outweighing the chance of 4. 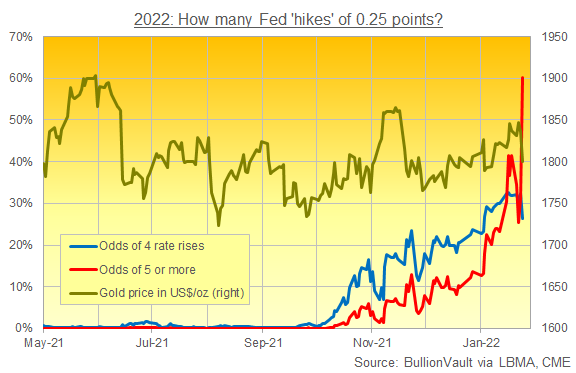 "The key words" driving the overnight shake-out in stock markets were 'soon' and 'strong'," says base-and-bullion specialist Rhona O'Connell at brokerage StoneX, reviewing the Fed statement and press conference today.
But while the Fed now shows a "hawkish but moderately pragmatic attitude" towards addressing inflation in 2022, "there's nothing in there that I can see justifying the money markets' call for 5 hikes this year."
So-called "lift off" from zero to 0.25% only became the consensus view for March after the Fed's meeting and statement in December, but a hike of 0.5 percentage points is now given a 1-in-5 chance.
Gold bullion in London – heart of the global precious metals market – dipped Thursday lunchtime towards $1800 per ounce, hitting 2-week lows down 2.7% from Tuesday's 2-month peak.
Silver prices meantime slipped through $23 per ounce for the first time this week, down 7.0% from last Thursday's 2-month high.
Despite the Fed's "hawkish" comments on US policy, the giant GLD gold-backed ETF investment trust expanded again on Wednesday, needing 0.1% more bullion to back its shares in issue – now at the most since mid-August.
The smaller IAU gold trust was unchanged however, as was the giant SLV silver ETF.
With the Dollar leaping on the currency market – hitting its highest since June 2020 on its trade-weighted with a daily jump of more than 1% – both Euro and UK gold prices in Pounds per ounce fell less steeply than for US investors, hitting only 1-week lows at €1613 and £1348 respectively.