END_OF_DOCUMENT_TOKEN_TO_BE_REPLACED

GOLD and SILVER PRICES held firm against a falling US Dollar on Tuesday but fell towards new multi-month lows for Euro and UK investors after precious-metal ETFs saw fresh investor selling the face of central banks moving to hike interest rates against the worst inflation in 4 decades.
Western government bond prices rallied, capping the benchmark 10-year Treasury yield beneath 3.00% per annum, and global stock markets also rallied weakly after erasing Monday's earlier gains to close lower for the 6th out of 12 sessions so far in July on the MSCI World Index.
With recession fears growing, "We may have to see some signs of 'peak hawkishness' [over interest rates] kicking in over the coming months [for] gold to regain some market confidence," Bloomberg quotes one spread-betting bookmaker.
"ECB to discuss ending negative rates with 50 basis-point move," says a headline about Thursday's Eurozone interest-rate decision at FT.com, also quoting the IMF warning of an "economic hit" to Europe from banning Russian gas imports over its war on Ukraine.
Gold priced in the Dollar today held around $1710 per ounce but the precious metal fell to a 5-month low of €1670 for Euro investors and a 4-month low of £1422 after the giant GLD gold-backed ETF yesterday saw net liquidation of more than 5 tonnes of bullion, shrinking the SPDR trust fund's backing to 1,009 tonnes in total, its smallest size since late January.
Smaller competitor gold ETF the IAU from iShares also shrank yesterday losing almost 2 tonnes to a 4-month low of 505 tonnes in gold bullion backing.
Silver ETF the iShares SLV in contrast enjoyed its heaviest net inflows since mid-April on Monday, needing to add an extra 168 tonnes after investor selling shrank the SLV to its smallest size in 2 years at 15,867 tonnes last week. 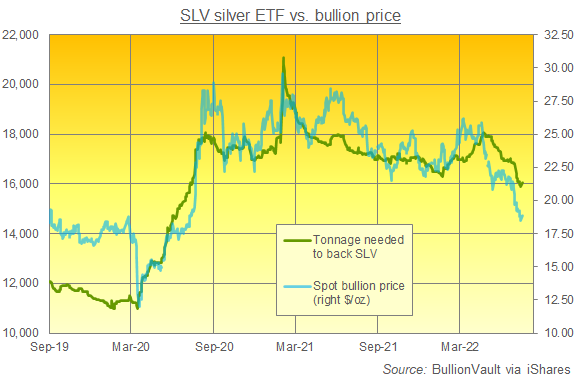 Yesterday's rebound still left the SLV silver ETF smaller by almost 24% from its record peak size of start-February 2021, when the trust fund swelled by 1/5th in 3 trading days amid the #silversqueeze silver ramp on social media platform Reddit.
Speculative betting against silver last week reached a 3-year high net of bullish bets among speculators trading Comex silver futures and derivatives.
Among fabricated physical products in contrast, "2022 is seeing record silver demand," said Philip Newman, managing director of specialist consultancy Metals Focus, on a webinar for the London Bullion Market Association last week.
Led by industrial demand amid the post-Covid economic reopening, there's also "real strength in the investment bar and coin market," said Newman, "concentrated in the US, Germany, India and Australia...where it's going heavily into individual pension funds [superannuation accounts]."
Like gold, silver prices today held flat for the week so far in US Dollar terms at $18.80 but fell back towards 2-year lows for UK and Euro investors at £15.63 and €18.34 per ounce respectively.
Industrial commodities fell further in Dollar terms on Tuesday, with US crude oil down near $100 per barrel as copper fell back towards last week's 20-month lows.
China's CSI300 share index meantime lost 0.5% to trade more than 1/4 below February 2021's record high as Shanghai enforced mass Covid testing amid a new wave of Omicron, and the "mortgage strike" continued to spread among home-buyers still waiting for or forced to live in unfinished apartments.
Russia's President Putin – now into the 5th month of his "special operation" invading Ukraine – meantime visits fellow pariah state Iran today to discuss Syria with 'Astana' partner Turkey, whose President Erdogan claims to have brokered a safe corridor for Ukrainian grain to be shipped out of Odesa, the Black Sea port hit again by Russian missiles this morning.
2022's "uncertain times" mean Apple Inc. (Nasdaq: AAPL) – the world's most valuable company – is reducing its hiring and cutting some teams according to insiders quoted by Bloomberg.
Set to announce its latest quarterly earnings next week, AAPL is also being sued in a class-action suit over blocking wallets other than its own software for contactless payments on Apple devices, a monopoly which the complaint alleges costs banks and credit unions $1 billion in excess fees.