END_OF_DOCUMENT_TOKEN_TO_BE_REPLACED

GOLD and SILVER PRICES extended their 10- and 18-week rallies respectively on Tuesday to set new multi-month highs on the first trading day of 2023 before easing back as investors sold stocks and bought bonds amid a raft of weak economic data.
News that China's Communist dictatorship is abandoning its 'zero Covid' policy of isolation and lockdowns had earlier seen the Hong Kong stock market leap 1.8% overnight, while Yuan gold prices for Chinese consumers – now set for the world's largest gold-buying festival of Lunar New Year ahead of Sunday, 22 January – reached the highest since March.
"The new year is supporting new inflows into all asset classes," Reuters quoted analyst Giovanni Staunovo at Swiss banking, wealth management and bullion market-making group UBS.
But after Asian stock markets rose on the Chinese news, European bourses cut their earlier gains as New York opened lower on the first day of the year, pulling the Dollar-denominated MSCI World Index down 0.2% by late-afternoon in London.
Gold came within 5 cents of $1850 per ounce, up 2.1% from New Year's Eve at the highest spot-market price for London bullion since mid-June, while silver peaked above $24.50 for the first time since April – up 39.7% from end-August's 2-year low – before also erasing almost all that gain on a sudden rebound in the Dollar on the currency market. 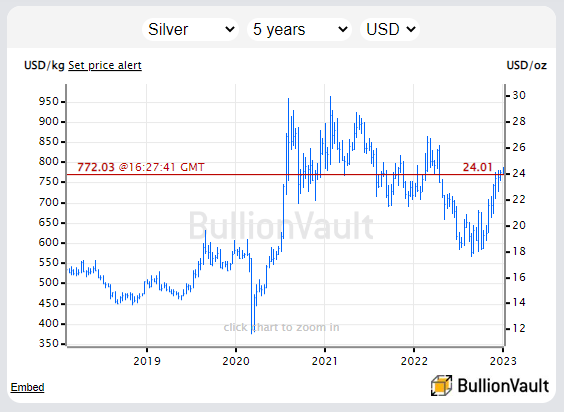 Data from US regulators show that last week's gains came as bullish and bearish speculators both cut their bets on Comex gold and silver contracts, helping grow the Managed Money category's net long position but suggesting more of a 'short squeeze' than any inflow of additional interest in the precious metals.
Giant gold ETF the GLD meantime recorded its 2nd consecutive week of net inflows but shrank by 6.0% across 2022 as a whole, while competitor trust fund the IAU remained at its smallest size since July 2020 – 8.9% smaller for the year – but snapped 18 consecutive weeks of investor liquidation.
Silver's monster SLV ETF meantime saw its 5th weekly outflow in a row, shrinking by 12.4% from the end of 2021.
While today's manufacturing PMI surveys from China, the Eurozone and the UK all came in stronger than analysts expected on Tuesday, they all showed continued declines in activity.
Germany's cost of living meantime sank by 1.2% last month from November, official data agency Destatis said today, cutting the 12-month rate of inflation from a 7-decade record of 11.3% to 9.6%, more than 1 whole percentage point below consensus forecasts.
The Eurozone's largest national economy also saw the number of people in work rise in December, holding the unemployment rate at 5.5% for the 5th month running.
Silver prices today broke 8-month highs above €23 for German and other Euro investors, and it came within 5 pence of a 2-year high for UK investors at £20.50 before easing back to £20.15 per ounce.
Gold meanwhile touched 2-year highs against the Indian Rupee, deepening the discount offered to investors and jewelry buyers by local dealers in gold's No.2 consumer market after it reached the equivalent of $26 per ounce to London quotes amid already poor demand last week.