END_OF_DOCUMENT_TOKEN_TO_BE_REPLACED

GOLD PRICES held deadflat for the week so far against a falling US Dollar in London Tuesday lunchtime, trading back at $1882 per ounce after regaining a $10 drop overnight.
Silver also held unchanged from the weekend versus the Dollar, trading at $27.60 as the wider commodities market slipped following another warning against "speculation" in vital resources by the Beijing dictatorship sent Chinese steel prices 6% lower overnight.
Global stock markets rose yet again after reversing the last of mid-May's 2.5% drop from new all-time highs on the MSCI World Index.
"General 'risk on' tone prevalent across the markets," says a trading note from Swiss refiners and finance group MKS Pamp, "but lower bond yields [have] helped support" gold prices.
Longer-term borrowing costs fell for almost all European governments on Tuesday, pulling Germany's 10-year Bund yield down to minus 0.15% after hitting the highest since May 2019 earlier this month.
"The 30-year German bond, which was negative for most of last year, now pays 0.42%," says Bloomberg, and "The global total for negative-yielding debt has dropped to about $12 trillion, from a high of more than $18 trillion in December." 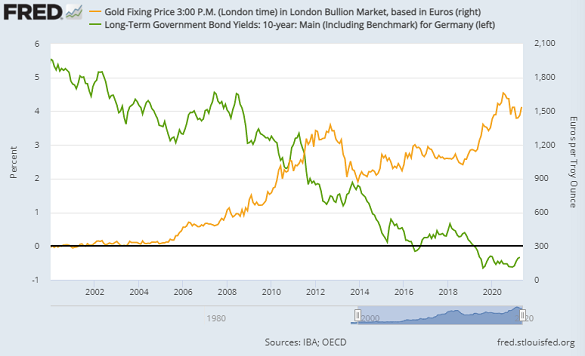 Gold priced in the Euro today dropped to €1535 per ounce, down €10 from the weekend as the single currency rose to its highest Dollar exchange rate since New Year.
"It's another head fake," says brokerage T.D.Securities' head of FX strategy Mark McCormick.
"[This] is once again an opportune time to sell the Euro."
Gold prices in Shanghai – entry point for all new bullion into China, the metal's No.1 mining, consumer and importing nation – today showed a premium of $13.50 per ounce above quotes in London, the global trading and storage hub.
Fifty per cent larger than the typical incentive for new imports, it came as the Yuan strengthened to its highest against the US Dollar since June 2018 on the FX market.
After launching a fresh ban on crypto-currency trading and mining last week, and with copper and iron ore setting new all-time highs this month, Beijing's National Development and Reform Commission yesterday declared "zero tolerance" for "hoarders and speculators", but Premier Li Keqiang then called for heavier imports and private stockpiling to get ahead of further price rises.
Domestic bonds from state-backed "bad loans bank" Huarong Asset Management Co. – "nowhere near" defaulting on its $22bn of foreign-owned debt according to state-backed newspaper Caixin last week – are now worth just 40% of their $18.5bn face value according to data reported today by Bloomberg.
"Its former chair Lai Xiaomin was executed for corruption in January, it has been unable to file its financial statements since March, its Hong Kong-listed shares are suspended and some of its perpetual bonds are trading below 65 cents on the dollar," says the Financial Times.
Source of the Covid-19 outbreak, China continues blocking World Health Organization (WHO) membership and involvement from neighboring Taiwan, the island nation claimed by Beijing as part of its territory where just 29 people have died in the pandemic among a population of 23 million.
"Stop politicising health issues and using the Taiwan issue to interfere in China's internal affairs," says the Beijing dictatorship's ambassador to the United Nations in Geneva.
Meantime in India, where the current Covid Crisis has seen the world's 2nd heaviest gold demand flip into a boom for lenders accepting jewelry as collateral from cash-strapped households, new rules will make hallmarking mandatory on all new jewelry from 1 June.
"We are coming up with an adequate number of hallmarking centres to support the industry," says Uday Shinde, president of the Indian Association of Hallmarking Centres, telling the Economic Times that 400 such centers will be open by end-June as a cost equivalent to $95,000 each.
Platinum prices meantime rallied 2.2% from yesterday's new 1-month low of $1163 per ounce.
That was the highest level in almost 5 years when reached in February's surge.
The precious metal's annual average price will rise by more than 1/3rd across 2021, says specialist consultancy Metals Focus, reaching the highest since 2014 at $1200 per ounce as the platinum market's surplus is "comfortably absorbed by institutional investors."