END_OF_DOCUMENT_TOKEN_TO_BE_REPLACED

GOLD PRICES slipped and silver extended its drop to 2-week lows in London trade Tuesday as industrial commodities fell hard and longer-term interest rates retreated further from their recent peaks on news of world No.4 economy Germany imposing its strictest anti-Covid lockdown to date.
Digital assets Bitcoin and Ethereum fell again, touching 2-week lows, while emerging Asia stock markets fell in the aftermath of yesterday's Turkish Lira turmoil but India's Sensex rallied.
The EuroStoxx 600 cut an initial 0.8% drop to unchanged by lunchtime in London.
"We are in a new pandemic [thanks to] significantly more deadly, significantly more infectious variants" of Covid-19 said Germany's Chancellor Angela Merkel after a fractious overnight meeting with federal and state leaders ended with a ban on travel and gatherings across Easter.
Nearly a third of France's population re-entered what Prime Minister Jean Castex called "lockdown" on Saturday, but now with the ability to go outdoors without seeking official permission.
The UK meantime marked the first anniversary of Prime Minister Boris Johnson's about-face – when he declared a national lockdown after repeatedly downplaying Covid's risks – by imposing £5,000 fines on anyone caught travelling abroad for a holiday.
European Brent crude oil sank $2.50 per barrel today to near $62.
US crude oil has now fallen nearly 14% from its 14-month peak of a fortnight ago.
Priced in crude, that puts gold – trading Tuesday around $1733 – at its highest in a month at 29 barrels of WTI per ounce of bullion. 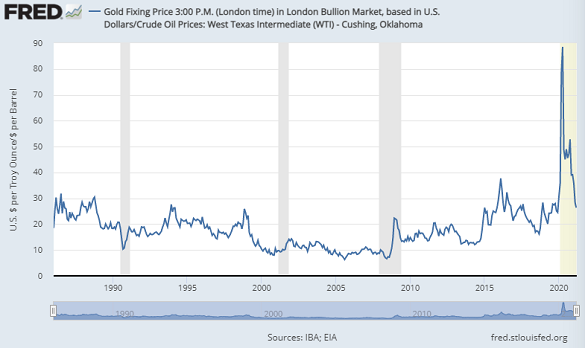 Silver prices today dropped to $25.25 per ounce, erasing the last 2 weeks' rally and sliding more than 15% from last month's Reddit Ramp spike to 8-year highs.
After Turkish President Erdoğan sacked his 3rd central-bank chief in 3 years at the weekend because the CBRT had raised interest rates in the face of surging inflation, the plunge in Turkey's Lira currency yesterday saw Borsa Istanbul's 100 stock index drop by 10%, its steepest plunge in 2 decades according to Bloomberg.
Emerging-market equities are more vulnerable to rising inflation forecasts, says analysis from Swiss bank UBS, closely followed by the US S&P500 index, with "value stocks" especially in Europe less susceptible.
Shanghai gold prices today held more than $9.50 per ounce above London quotes, extending the run of solid incentives to new imports – out of the metal's key storage and trading hub, into its No.1 consumer nation – which returned this January after 2020's historic discounts signalled a collapse in Chinese household demand amid the Covid Crisis and lockdowns.
Elsewhere, "Twitter boss Jack Dorsey's first tweet sold for $2.9 million as an NFT," says Reuters, reporting how Malaysia-based 'blockchain CEO'  Sina Estavi yesterday bid 1,630 in so-called crypto currency Ether for what auction platform Valuables says is a digitally-signed non-fungible token representing the message of 21 March 2006, when the CEO of Twitter ( said "just setting up my twttr".
The tweet, reproduced by Reuters and every other news-site reporting the news, is available for anyone to view, like, quote, link or copy and paste on Twitter.
"I think years later people will realise the true value of this tweet, like the Mona Lisa painting," says Estavi.
Twitter (NYSE: TWTR) last year lost $1.1 billion on total revenues of $3.7bn.
"So what's the value of an NFT?" asks the UK's Sky News of these new "digital assets".
"That's a very challenging philosophical question. There are a number of competing schools of thought."
"In the past month, people have spent over $1 billion on [these] digital assets," claimed Business Insider at the weekend.
"With younger investors more likely to consume news via social media," says UK magazine Professional Adviser, quoting a new report from UK watchdog the FCA warning against the "gamification" of personal investment among younger people, "algorithms play a large part in the opportunities they see, leading to a surge in investment in cryptocurrency and Tesla.
Stock in Tesla (Nasdaq: TSLA) has now fallen by 25% from start-February's record high, but remains almost 8 times above its price of this time a year ago.
Original cryptocurrency Bitcoin today fell 3.2% from this time yesterday, losing 10% in Dollar terms from its current record of 10 days ago but also holding around 8 times its price of 12 months ago today.
"Cryptocurrency fund inflows have been on the decline," says one Bitcoin news-site, "which could suggest investor uncertainty about BTC's price."
Back in gold, and having expanded Friday for the first time in 2 weeks, the giant SPDR Gold Trust (NYSEArc: GLD) yesterday held unchanged in size, needing just less than 1,052 tonnes of bullion backing.
The smaller, cheaper iShares gold ETF (NYSEArca: IAU) meantime expanded for a second session running, its first 2-day growth since the first week of January, to need nearly 508 tonnes of bullion.