END_OF_DOCUMENT_TOKEN_TO_BE_REPLACED

GOLD and SILVER BULLION prices popped higher on the strongest US inflation data in 3 decades on Friday, taking their rallies from last week's plunge to 0.8% and 1.7% respectively.
Gold prices jumped to $1787 per ounce, reversing $15 of last week's $100 drop, after new figures said core PCE – the US Federal Reserve's preferred measure of inflation, and for which it sets a 2.0% target – accelerated from 3.1% per year to 3.4% in May.
While that missed analyst forecasts of 3.5%, it was still the fastest annual rise in the cost of living since April 1992 when volatile fuel and food prices are excluded.
Silver bullion meantime rose back to $26.25 per ounce, well over 50 cents above last Friday's 10-week closing low.
"Temporary is going to be a little longer than we expected initially," said Atlanta Fed President Raphael Bostic this week of the central bank's repeated forecast that Spring 2021's 3-decade highs for inflation are 'transitory', and confirming that he was one of the seven Fed officials to predict a late-2022 hike to interest rates at last week's policy meeting. 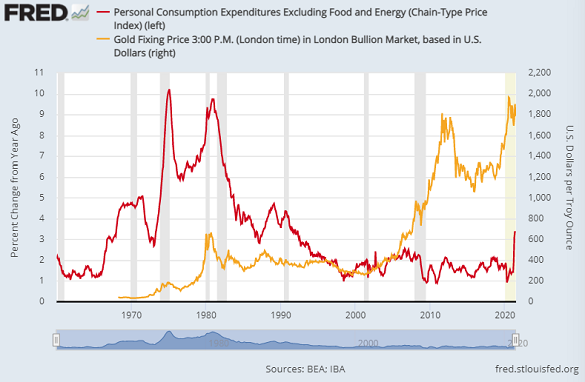 Commodity prices meantime rose sharply again, as did Asian equities after the overnight jump in US stocks following President Biden's announcement of a $1.2 trillion infrastructure spending deal between Democrat and Republican politicians.
The US Dollar retreated again on Friday's PCE inflation data, while Mexico's Peso extended its gains following yesterday's surprise interest-rate hike by its central bank, nearing its strongest Dollar value since the Covid Crisis began in March 2020 after Banxico cited rising inflation and the currency's recent depreciation for its decision.
The Chinese Yuan also reached a 1-week high against the Dollar on Friday, while Shanghai gold prices ended the week unchanged at ¥370 per gram.
That sustained a small premium of $4 per ounce for bullion landed in China – gold's No.1 mining and consumer nation – compared to quotes in London, the metal's central trading and storage hub.
"Wedding season's over" in India however, Reuters quotes one bank dealer, "and there's no big festival in the short term to boost demand" among households in the metal's No.2 consumer market.
Together with stores remaining closed thanks to India's continuing Covid Crisis – now blamed for far more deaths than the official tally of 393,000 – that kept domestic prices at a steep $12 per ounce discount to London this week as dealers work through existing inventory rather than making new imports. 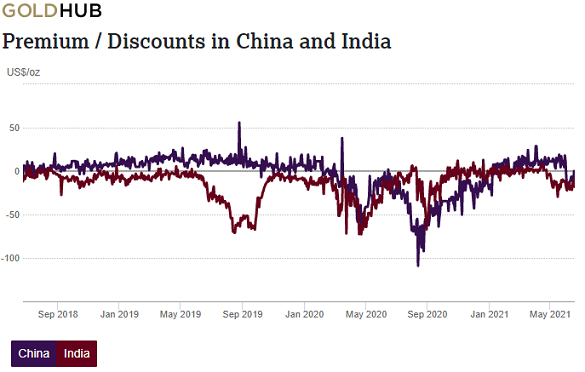 "Precious metals remain contained and well within recent weekly ranges," said one bullion desk in a note ahead of today's US data, "with thin sideways trading."
The giant GLD gold-backed ETF shrank again Thursday, taking the net liquidation by shareholders to 18.5% since last September's 7-year high.
Smaller competitor the iShares IAU gold trust was meantime unchanged in size yet again, holding 5.0% smaller than last November's record.
Silver-backed ETF the SLV shrank yet again, extending its outflows to 6 sessions running and liquidating almost 500 tonnes of bullion bars – some 2.7% – since the US Fed updated its economic projections and forecast an earlier rise in interest rates last Wednesday.
The SLV reached a fresh all-time record size needing 21,067 tonnes of backing at the start of February amid the sudden and brief #silversqueeze phenomenon on social media.
It ended Thursday needing 17,450 tonnes of silver bullion, the least since mid-January.
Among jewelry consumers, "People [in India] are postponing purchases hoping for further price declines," says wholesaler Ashok Jain at Chenaji Narsinghji in Mumbai.
"Imports of unworked gold continue to remain very low," says MoneyControl, "as jewellers foresee a major slump in sales going forward [thanks] to salary cuts, job losses and economic uncertainty.
"This is expected to have further ripple effects on employment in the sector, which had been under pressure even before the pandemic, and has since then seen major job losses as small jewellery units have been hit hard."
Gold bullion imports to India totaled US$14.7 billion in March and April, but sank to just $0.6bn for last month.
"From September 2020 onwards, as the lockdown was gradually lifted, imports rose fast till April. As the second wave arrived and lockdowns were reimposed, all stores in major cities were closed,”, told Moneycontrol.
"It will at least take a month or two to clear existing inventory before imports rise again," says Sabyasachi Ray of the Gems and Jewellery Export Promotion Council (GJEPC), forecasting a surge in India's household demand – led by a boom in weddings – if the current wave of Covid subsides soon.