END_OF_DOCUMENT_TOKEN_TO_BE_REPLACED

GOLD PRICES retreated almost $20 on Monday after hitting a new 5-month high above $1810 overnight amid news of China's rulers accelerating their pivot away from 'zero Covid' restrictions following recent protests, while crude oil prices jumped as Western nations started to implement a cap on Russian energy supplies over its continued invasion of Ukraine, says Atsuko Whitehouse at BullionVault.
Rising 2.5% last week for US investors as the Federal Reserve signalled a slowdown in its inflation-fighting interest-rate hikes, spot gold today edged lower to $1790 per ounce after touching the highest since 5th July at $1810 per ounce as the US Dollar and longer-term bond yields both steadied at 5- and 3-month lows respectively.
"The supportive factors for precious metals continue to line up – China's reopening, lower US yields and a weaker Dollar," says derivatives platform Saxo Bank's Strategy Team, explaining how that backdrop has helped gold run higher to test a break above the key $1800 level for the first time since August.
"If the $1800 level can be consolidated, short-term traders will probably turn into full-fledged buyers," reckons Bruce Ikemizu, chief director of the Japan Bullion Market Association, noting how last week's gold gains came despite the stronger-than-expected US jobs data published on Friday.
"Perhaps short covering is over and short-term trend followers are turning to buy on dips rather than sell on rallies," Ikemizu says. 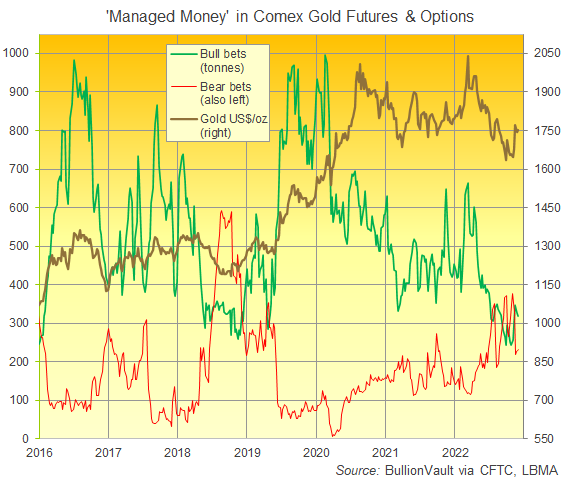 Latest data published by US regulator the Commodities Futures Trading Commission show that in the week-ending Tuesday 29 November, before gold's price rally accelerated from $1750 per ounce, hedge funds and other leveraged speculators in Comex gold futures and options cut their bullish betting by 2.7% on gold as a group and grew their bearish betting 1.5%.
Overall, that shrunk the net long position of Managed Money traders for the 2nd week in a row to the smallest in 3 weeks, down below 78% of the 5-year average.
On a gross basis this year so far, the group's average short position in gold derivatives has now been 39% bigger than the previous 5-year average, while the 2022 long position is 30% smaller.
Silver, in contrast, last week saw speculators raise their net bullish betting by 16% according to the latest CFTC data, and they also expanded their long  position on platinum contracts by 5%.
The price of silver, which finds over half of its annual demand from industrial uses, also edged lower on Monday after surging again, extending last week's 7.9% rise to touch $23.51 per ounce, a new 7-month high.
Platinum, which finds two-thirds of its demand from industrial uses led by auto-catalysts, traded 0.2% higher at $1023 per ounce by Monday lunch time after rising 3.5% last week.
The Dollar index – a measure of the US currency's value versus its major peers – again edged lower, dipping to its lowest level since the end of June before rallying at the start of New York trade.
The greenback fell 1.4% last week after Fed chair Jerome Powell said that this month's rate rise will be "moderate" following cooler-than-expected US inflation data.
Ten-year US Treasury yields – a benchmark rate for government as well as many finance and commercial borrowing costs – meanwhile edged higher to 3.5% after falling last week to the lowest since mid-September.
Following widespread protests against 'zero Covid' lockdowns, the Chinese authorities over the weekend eased testing requirements across major cities –including the financial hub of Shanghai, and followed Monday by cities including Shenzhen, Dalian and Jiangxi – and also scrapped PCR testing requirements to enter outdoor public venue such as parks or use public transportation, starting today.
China's stock markets rallied, with the Hang Seng index in Hong Kong rising 4.5% on Monday after surging 29% in November – its best monthly rise since 1998.
Gold prices on the Shanghai Gold Exchange meantime continued to show a premium to London, increasing the incentive for imports to $7 per ounce on Monday after it dipped last week to the smallest in 4.5 months as the Yuan gold price hit over 26-month highs.
Oil also rose on Monday, with the price of European benchmark Brent crude up almost 2% after the G7 group of major economies, Australia, and the 27 European Union countries implemented a cap of $60 per barrel on any Russian crude shipped using G7 or EU tankers, insurance companies and credit institutions in an effort to reduce the Kremlin's income from fossil fuels and so curtail Moscow's ability to finance its war in Ukraine.
Although Poland's ambassador to the EU, Andrzej Sados, said on Friday that the mechanism in the final deal would keep the price cap at least 5% below the market price, security experts at the CSIS thinktank say a cap at $60 is toothless since it is above the current price of Russian benchmark Urals, now about $52 a barrel.
"One thing is clear: we will not recognise any cap on the price of oil," says Kremlin spokesperson Dmitry Peskov, describing the policy as "destabilising global energy markets."
On Sunday the Opec+ alliance of producer nations agreed to maintain production at current levels, renewing the 2 million barrel-a-day reduction agreed at its last gathering in October.
European stock markets were meanwhile flat on Monday after S&P Global's final composite PMI for manufacturing plus the service sector across the 19-nation Eurozone showed activity shrinking for the 5th consecutive month.
Retail sales in the Euro area in October suffered their biggest monthly fall of the year.