END_OF_DOCUMENT_TOKEN_TO_BE_REPLACED

GOLD and SILVER held onto yesterday's steep gains Wednesday in London, trading at 5-week and 4-month highs respectively against a rallying US Dollar, as Russia pulled troops out of a key Ukrainian city and early results from the US mid-term elections said the Senate and Congress will likely be split rather than one party taking control.
Gold prices spiked to $1722 around this afternoon's London benchmarking auction, over $100 higher from the 2.5-year low tested for the 3rd time in a month last week and $40 above the post-Covid chart-support level which gave way in mid-September.
Silver meantime reached $21.59 per ounce after leaping as the mid-term elections saw global and US stock markets fall on Tuesday, trading more than 22% above late-August's 2-year low.
"Definitely not a Republican wave," said one senior GOP politician.
"They are trying to steal the election," said former Republican president Donald Trump, repeating his accusations from losing the 2020 White House race and blaming Democrats for causing technical issues with some "bad machines and DELAY" in Arizona.
"Don't let it happen!”
Fixing at 3pm UK time Tuesday at $1678 per ounce on weak volume, gold then soared by almost $40 in late-US trade, hitting the highest Dollar price in a month and breaking what many chart analysts saw as the downtrend starting back at early March's Ukraine-invasion touch of gold's all-time 2020 high around $2070 per ounce. 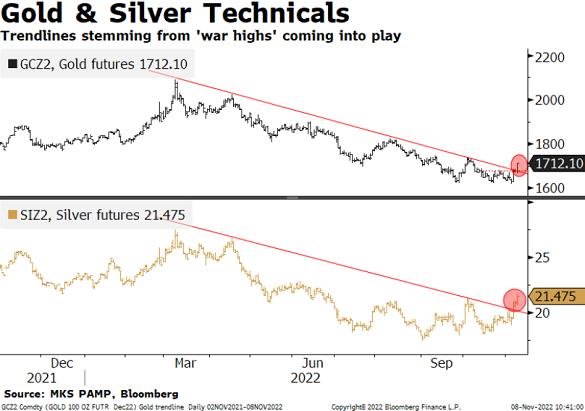 "The Dollar flip on mid-term [election] day sent gold above $1710," says bullion analyst Rhona O'Connell at brokerage StoneX, noting how the US currency fell to its weakest in 4 months on Tuesday with "the 'big red wave' now looking more like a ripple, if that."
"US real yields falling provided the backdrop when no-one wants to be short gold into any US election," adds bullion refining and finance group MKS Pamp's market strategist Nicky Shiels.
"Gold ain't waiting for what's expected to be a weak / interesting NFP [US jobs] report in early Dec," she said Tuesday, pointing to this week's fast-growing list of US tech company lay-offs.
"The 75bp Fed regime [of steep month rate hikes] is behind us, thus the $1620-1700 range [for gold is also] behind us...3-4 attempts at the technical ceilings at $1680/oz Gold and $21 Silver [have given] way."
While the weak Dollar grabbed the headlines, Euro-priced gold today held above €1700 per ounce, gaining 1.2% for the week so far, while the UK gold price in Pounds per ounce also rose to 4-week highs, breaking above £1500 and trading 6.3% higher from the start of November.
Euro and UK prices for silver – a predominantly industrial metal – meantime touched 6-month highs above €21.40 and £18.80 per ounce respectively.
The Communist dictatorship in World No.2 economy China is meeting "difficulties" in enforcing its 'zero Covid' policy in the south-eastern port city of Guangzhou, press reports say, imposing mandatory testing and local lockdowns where a growing number of cases are confirmed.
Russia's top military commander in Ukraine today told the Defense Ministry that it's now impossible to supply his troops in the city of Kherson, winning agreement from the Kremlin for a retreat to try defending the eastern bank of the Dnieper – "a major setback" for Moscow in its 8-month war, according to Western media.