END_OF_DOCUMENT_TOKEN_TO_BE_REPLACED

SILVER held firmer than gold prices on Tuesday but both metals slipped as Western stock markets rallied from their latest sell-off and energy prices jumped once more, setting fresh record highs for European consumers.
Silver prices edged below $22.50 per ounce and gold fell through $1750 as New York trading started with news that service-sector orders in the US beat analyst forecasts for September on the ISM survey.
Separate data said the US imported $73.3bn more in goods and services than it exported in August.
In goods alone, 10 of the 11 heaviest-ever monthly US trade deficits in goods have come since October last year.
Bloomberg's Commodity Index meantime hit a new all-time high as European gas and electricity prices leapt yet again, taking Nymex gas futures over 7.1% higher as US heating oil rose by 1.8% and European Brent broke new 3-year highs above $82 per barrel.
"To put the rally in European natural gas prices into context," says Bloomberg correspondent Javier Blas, "at current prices gas is trading above $215 per barrel of oil equivalent."
"If we're looking from an overall perspective," reckons Mary Nicola, a portfolio manager at $35-billion asset managers PineBridge Investments, "we don't see a supercycle in the commodity space, especially when we see slower growth coming out of China."
"China's developers priced for meltdown as contagion risk spreads," says another Bloomberg headline after Fantasia Holdings Group Co Ltd joined the debt-laden Evergrande real-estate group in failing to make debt repayments on schedule.
Fantastia (HKG: 1777) has now lost 70% of its value from July 2020's multi-year high on the Hong Kong stock market, while Evergrande (HKG: 3333) has dropped 89% of its market cap since then.
This week's National Day holidays on the mainland – where anti-Covid rules have banned foreign travel and cut domestic journeys by 1/5th from last year's vacation – are worsening the Hong Kong sell-off, Bloomberg says, because the People's Bank of China is unable to inject liquidity into the money market. 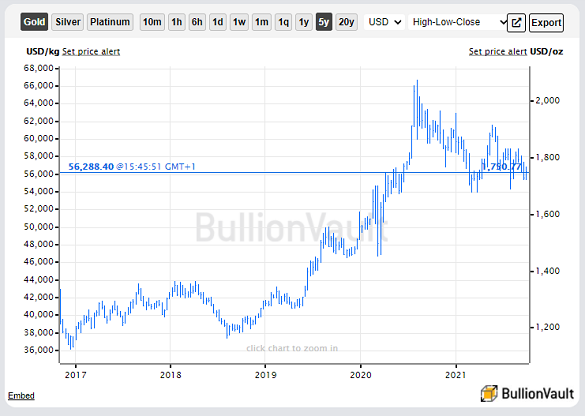 "Gold [in particular] does better in an environment where you have an increase in money supply," PineBridge's Nicola says.
"Just borrowing more money and stacking up bills for future generations to pay is not just economically irresponsible," said UK finance minister Rishi Sunak at the ruling Conservative Party's annual conference yesterday.
"It is immoral."
UK public debt has leapt to more than 100% of annual GDP under Sunak's response to the Covid Crisis, up from what was already a 6-decade record of 80% under his party's coalition and then ruling governments since the global financial crisis.
The UK gold price in Pounds per ounce today held over £10 lower for the week so far at £1278, a level first reached in September 2019, four months before the Covid Crisis began.
Euro-priced gold meantime traded around €1510 as the EuroStoxx 600 index reversed the last 3 days of decline to trade up 13.3% for the year so far at 455 points.
That was a new all-time high for European equities when first reached in June.
Like in the US, September's services-sector growth was also stronger than expected across the 19-nation Eurozone and the UK according to new PMI surveys today, but "Growth slows further," said the Markit data agency, "as demand pressures cool and supply issues constrain business activity."
Russian gas giant Gazprom "has reduced the gas flow to Europe via Belarus and Poland by 70% and via Ukraine by 20% since last week," according to its own data, reports Germany's Bild journalist Julian Röpcke.
"Putin is using energy as a weapon, calling the Merkel-Biden bluff" over the controversial Nordstream 2 pipeline.
Meantime in New York, the tech-heavy Nasdaq index rebounded from Monday's fresh plunge, up 1.2% in early trade.
The FAANG stocks of Facebook, Apple, Amazon, Netflix and Google-owner Alphabet ended last night 10% below their last record all-time high of this time last month, pulled down by Facebook (Nasdaq: FB) losing 5.0% yesterday amid its "faulty configuration change" taking Facebook, Instagram and Whatsapp offline for 8 hours for their 3.5 billion users worldwide.
"There are substantial tailwinds for a significant rebound in gold," says gold ETF provider State Street Global Advisors' precious-metals strategist George Milling-Stanley.
"There is significant potential for more of the volatility we have seen of late, which will heighten the lure of gold as an investment.
"Couple this with rising inflation and you have the recipe for gold to act as the most attractive safe-haven asset for investors to not only generate returns in their portfolios, but also provide downside protection."