END_OF_DOCUMENT_TOKEN_TO_BE_REPLACED

GOLD BULLION continued to rally and silver prices also hit 3-week highs against a falling Dollar in London trade Thursday after the US Federal Reserve hiked its key interest rate as expected yet new data said the world's largest economy just shrank for the second calendar quarter in a row.
Gold priced in the Dollar hit $1745 per ounce, almost $65 above last week's 16-month low, and bullion also rose sharply against the Euro at €1720 but was flat for the so far in British Pounds at £1440.
Trading as high as $19.50 per ounce, silver prices meantime added 7.4% from mid-July's 2-year low.
Having shrunk at an annualized pace of 1.6% in Q1, the US economy shrank 0.9% between April and June, the Bureau of Economic Analysis said today.
While most likely skirting the technical definition of a GDP recession thanks to continued jobs growth, "Recent indicators of spending and production have softened," said Federal Reserve chairman Jerome Powell on Wednesday.
"Growth in consumer spending has slowed significantly, in part reflecting lower real disposable income and tighter financial conditions...Business fixed investment also looks to have declined."
Coming after yesterday's three-quarters point hike to overnight Fed interest rates, Thursday's GDP data saw the price of longer-term US government bonds rise, pushing down the annual yield offered to new buyers even further below the pace of inflation, estimated at 9.1% for June.
Trading at 2.71% on Thursday morning, the yield on 10-year bonds is also now below the rate offered on every shorter-term US Treasury promise except 1-month, 2-month and 3-month debt – a so-called "inverted yield curve" which has proceeded each of the last 6 recessions in the US economy. 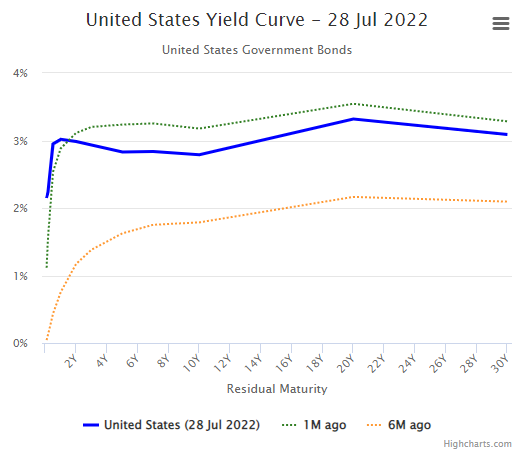 "The labor market is extremely tight, and inflation is much too high," said Fed chair Powell at his regular press conference following yesterday's announcement.
Powell said his policy team "anticipates that ongoing increases in the target range for the federal funds rate will be appropriate. In addition, we are continuing the process of significantly
reducing the size of our balance sheet."
For gold investing flows, "Aggressive monetary policy tightening and continued US Dollar strength may create headwinds," says the latest demand-data report from the mining industry's World Gold Council, "but we see opportunities for safe-haven demand to continue.
"Even if inflation decelerates, consumer prices remain high and are impacting asset allocation decisions. Additionally, a near-term resolution to the Ukraine war is remote, while further economic weakness is likely in Europe and the US as well as China."
But while this backdrop "should support some sectors of investment and central bank buying," says the WGC's new Gold Demand Trends, "these factors may weigh on consumer-driven demand and could spur higher recycling supply."
Giant gold-backed ETF trust fund the SPDR Gold product (NYSEArca: GLD) was unchanged in size for a second session running on Wednesday, needing 1005 tonnes of bullion – still the smallest since 20th January.
Smaller competitor gold ETF the iShares Trust (NYSEArca: IAU) also did not change at 501 tonnes, the smallest since 1st March.
But silver's giant ETF – the iShares Silver Trust (NYSEArca: SLV) – shrank by 2.3% on the day of the Fed's latest rate hike, needing the least bullion to back its value since mid-June 2020 at 15,057 tonnes.
Global gold bar and coin demand was flat between April and June compared with the second quarter of last year, the World Gold Council's latest report says, with "a sharp drop in China" – due primarily to Beijing's 'zero Covid' policy forcing a series of lockdowns – "offset by growth in India, the Middle East and Turkey."