END_OF_DOCUMENT_TOKEN_TO_BE_REPLACED

GOLD PRICES rose in terms of the US Dollar, Euro, British Pound and all other major currencies on Tuesday in London but silver held onto yesterday's steep fall even as industrial commodities rallied and Western stock markets bounced from their worst plunge of 2021 so far.
Crude oil steadied after sinking 8% at one point Monday as the re-imposition of Covid restrictions across parts of Asia and Europe coincided with the Opec+ producers' cartel agreeing to allow higher output.
Gold today touched $1823 per ounce, higher by 0.6% for the week so far in Dollar terms and up nearly $25 from Monday's sudden 1-week low.
Silver prices in contrast struggled to hold 10 cents above yesterday's 3-month low of $25 per ounce.
Together that pushed the Gold/Silver Ratio – a simple measure of the 2 former monetary metals' relative pricing – up through 72, its highest since mid-January.
This 24-week high in the cost of gold measured in silver comes after the Gold/Silver Ratio leapt on spring 2020's first wave of the global Covid Crisis to match its record peak of the Second World War and briefly touch 124.
The Gold/Silver Ratio has now averaged 59 since the US Dollar lost its gold backing 50 years ago next month.
Over the last decade however the ratio has risen to price 1 ounce of gold at nearly 72 ounces of silver. 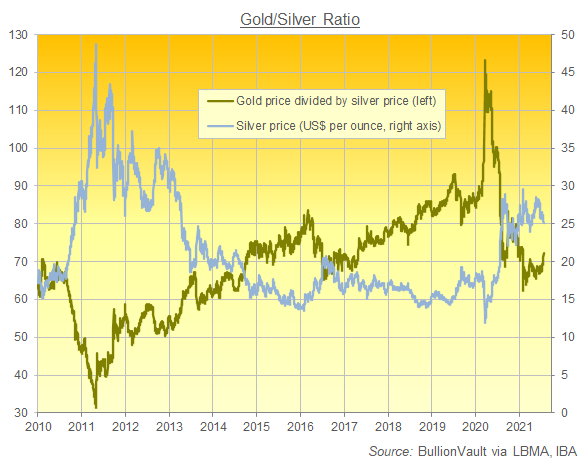 Looking at the multi-decade highs for inflation even amid summer 2021's worsening wave of the Covid pandemic, "The changing macro environment has been ultimately to gold's benefit after the sharp sell-off in mid-June," says Jonathan Butler, head of business development for precious metals at Japanese conglomerate Mitsubishi's European division.
"The ongoing post-pandemic demand recovery together with supply constraints in key sectors such as construction and manufacturing may lead to sustained higher inflation – an environment in which gold traditionally thrives."
Silver investment demand is also benefiting, Butler says, with holdings in physically-backed exchange traded funds remaining steady and "highlighting the attraction of physical investment assets in a world of rising inflation and post-Covid uncertainty."
Monday saw the giant iShares Silver Trust from Blackrock (NYSEArca: SLV) report its heaviest 1-day inflow of metal – needed to back the number of shares in issue – since late-February, adding 224 tonnes.
That took the SLV's total bullion backing above 17,451 tonnes, the most in 3 weeks and equal to two-thirds of 2021's projected global mine output.
Demand is also growing from silver's industrial uses, Mitsubishi's Butler says, notably "for high-grade physical silver in industrial applications, including electronics, solar cell manufacturing and ethylene oxide, with elevated premiums [for physical delivery] on both sides of the Atlantic."
But today "Silver [was] trading directionless in Asia after seeing heavy selling yesterday," says a note from Swiss refining and finance group MKS Pamp.
A further 0.9% fall in Japan's Nikkei share index meantime saw it enter "a correction" says Bloomberg, losing over 5% from this time last month ahead of the domestically unpopular Olympic Games starting on Friday despite Tokyo moving to a state of emergency amid rising Covid cases, hospitalizations and deaths.
European equities stemmed their plunge however, regaining 1 of the 10 points lost Monday on the EuroStoxx 600 index.
Trading Tuesday lunchtime at 445, the index set a fresh all-time high this time last week at 460.
Gold priced in the Euro currency today came with €1.50 of last week's 1-month high at €1550 per ounce.
The UK gold price in Pounds per ounce reached 5-week highs above £1340.