END_OF_DOCUMENT_TOKEN_TO_BE_REPLACED

GOLD and SILVER PRICES both fell hard Friday afternoon in London but still set their highest weekly close of 2021 so far after the head of the European Central Bank repeated its commitment to sub-zero interest rates and €1.9 trillion QE bond-buying stimulus for the 19-nation currency bloc.
Preliminary PMI data from the ISM's monthly surveys said US manufacturing continues to grow strongly, while services-sector activity has blown past analyst forecasts as the world's largest economy re-opens from Covid lockdowns.
Helping the Dollar to bounce on the FX market, that news knocked silver prices back 30 cents to $27.70 and gold dropped almost $15 per ounce at $1875 as world stock markets extended their bounce from last week's plunge but crypto-currencies resumed their crash, with all of the 10 largest cryptos by market cap showing a loss for the day.
Commodities rose, pushing US crude oil over 2% higher for the day to $63 per barrel – a 13-month high when reached this February.
Gold prices had earlier peaked above $1888 per ounce, up $50 from last Friday afternoon's LBMA benchmarking auction and still beating its best weekly close since end-December.
Silver had meantime spiked back above $28 after setting its highest Friday benchmark since early August's 7-year high of $28.33 per ounce. 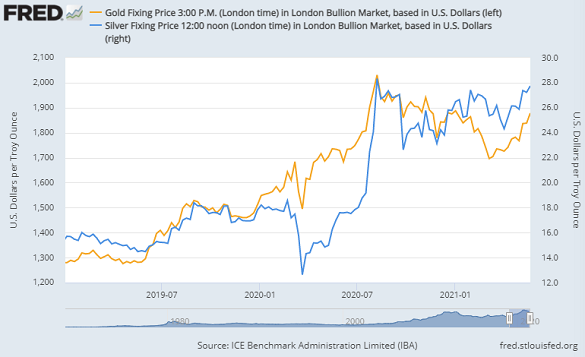 "It's far too early and it's actually unnecessary to debate longer-term issues," said Christine Lagarde – president of the 19-nation European Central Bank – when asked today about rising inflation data and forecasts, an issue also shrugged off at last month's US Federal Reserve meeting according to minutes released on Wednesday.
"We are committed to preserving favourable financing conditions," Lagarde said.
Western government bond prices rose across the board after Lagarde spoke, pulling 10-year borrowing costs for Italy – now with public debt-to-GDP ratio of nearly 160% – back down toward 1.00% per annum, a record low when first reached in 2015 after the ECB's move to negative short-term interest rates.
Crypto-currency Bitcoin meantime dropped over 19% from 24 hours earlier as Ethereum sank by one-third and comedy token Dogecoin lost 28%.
"The place of Bitcoin in any investment portfolio remains highly contested, precisely because of its erratic price movements," says a strategy note from French bank and London bullion market maker Societe General, repeating comments from other analysts and observers picked up Wednesday by MarketWatch and also noted by Germany's Handelsblatt yesterday.
Gold in contrast can "partially offset capital losses on bonds," the SocGen note says, "[with a] protective role in partially offsetting losses" on equities when inflation hits stock markets or investors fear a return to credit contraction under deflation in consumer prices.
With gold and silver trading at $1885 and $27.90 per ounce respectively as New York opened on Friday, the platinum price crept back above $1200 but still showed a 2.3% loss for the week.
"As of today, there is no risk of a durable return of inflation in the Eurozone," Lagarde's ECB colleague and Banque de France governor François Villeroy de Galhau said earlier this week.
"Therefore, it goes without saying, there is no doubt that the monetary policy of the ECB will remain very accommodative."
"Any suggestion of a reduction in our [QE bond] purchases...is purely speculative," Villeroy had already  told French television last week.
But while Eurozone inflation averaged 1.6% per year last month, the union's largest economy Germany saw prices rise 2.0% as a VAT sales cut ended.
Bond-market prices this week suggested the highest outlook for Eurozone inflation since end-2018 on five-year forwards.
Inflation forecasts in the US bond market yesterday fell to the lowest in nearly 4 weeks, with 10-year breakeven rates losing 13 basis points from Monday's fresh 8-year high of 2.54%.
That breakeven rate rose back to 2.47% in Friday's trade as conventional bond yields fell more quickly than rates on inflation-protected debt.
Among the largest gold ETFs, the giant SPDR Gold Trust (NYSEArca: GLD) grew by 0.6% on Thursday, heading for its third weekly expansion in a row, as did the iShares IAU product.
iShares' Silver ETF (NYSEArca: SLV) meantime needed an additional 40.4 tonnes on Thursday as its shares in issue grew by 0.2% on net investor demand), reaching 17,821 tonnes and finally snapping 14 weeks of investor outflows after the #silversqueeze ramp and spike of start-February.