END_OF_DOCUMENT_TOKEN_TO_BE_REPLACED

GOLD and SILVER bullion held firm ahead of the US Federal Reserve's latest policy decision, due later on Wednesday,
Asian stock markets slipped and European equities held flat as the start of New York trade approached.
The S&P 500 index of America's largest listed businesses closed last night 3.2% higher from the last Fed announcement in mid-March.
Gold prices today held 1.8% higher, keeping half of the precious metal's initial surge to $1271 per ounce made after the US central bank cut its projected number of interest-rate hikes from 4 to just 2 for 2016.
Silver prices meantime traded 14% above where they stood at the last Fed meeting, having extended their immediate jump by a further $2 per ounce to a series of 11-month highs.
"Silver remains rampant as the ratio with gold continues to drop towards 70:1," says today's commodities note from Chinese-owned bullion bank ICBC Standard Bank.
Nearing a two-decade high above 83 at this point in February, the Gold/Silver Ratio today touched 71.8 – the lowest price of gold in silver bullion terms since May 2015.
Dropping 14% since that recent peak, the Gold/Silver Ratio has fallen at its fastest pace since the start of 2012. 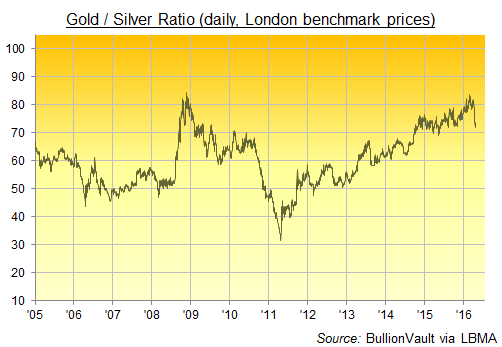 With silver prices now outstripping gold's 18% gains for 2016 to date by two-fifths, "Late entrants to this party will leave with an almighty hangover," warns ICBC Standard Bank.
"But it is very hard to predict when the music will stop."
"[Gold's] rally so far in 2016 [also] developed too rapidly in our view," says a new quarterly update on world supply and demand data from specialist analysts Thomson Reuters GFMS.
"With poor demand from Asia we expect the gold price to ease sooner rather than later, particularly if fears about the global economy continue to abate.
UK economic growth retreated to the slowest quarterly pace in 3 years at 0.4% between January and March, new data said today.
Eurozone borrowing growth held unchanged in March, the European Central Bank reported, with new bank loans expanding by only 1.6% per year despite the ECB's move to more deeply negative deposit interest rates and now €80 billion per month in QE bond purchases.
With concerns over Chinese debt defaults rising, stockmarket-traded businesses in China  had to wait 70 days on average to receive payment in 2015 the Financial Times reports today, up from 60 days the year before and the longest wait since 2001.
Debtor days were still one-third below the level of the year 2000 however, according to financial database Wind Information.
The Fed is scheduled to release only a statement today, rather than the economic projections and formal press conference at which major announcements are more usually expected.