END_OF_DOCUMENT_TOKEN_TO_BE_REPLACED

GOLD PRICES headed for the lowest weekly finish in April so far on Friday, trading more than 3% below Monday's 6-week high after Federal Reserve chief Jerome Powell said the US central bank is likely to raise its key interest rate by half-a-percentage point in its May 4th monetary policy decision.
Ahead of London's 3pm benchmarking auction, the price of gold slipped to $1935 per ounce as the Dollar Index – tracking the US currency's exchange-rate value against a basket of its major FX peers – rose back towards this week's 2-year highs.
Silver prices meantime extended yesterday's slump, briefing dropping as low as $24.06 per ounce before rallying by 30 cents.
That marked a new low for April, more than 8.2% below Monday's 6-week high. 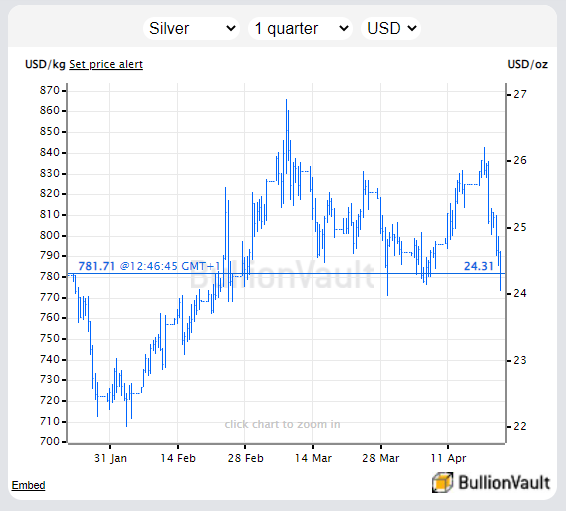 "Powell completes hawkish pivot," says a headline at Reuters.
"Fed's Powell seals expectations of half-point rate rise in May," says the Wall Street Journal.
"[But] surging US inflation expectations defy Fed's efforts to tame price growth," says the Financial Times, noting that 10-year breakevens in the bond market – a forecast for the cost-of-living figured from the gap between conventional and inflation-protected yields – have jumped today above 3.0% per annum for the next 10 years, the highest on record.
Ten-year US Treasury bond yields today edged higher to 2.92% per annum, but the rate on inflation-protected TIPS – launched in 2003 – fell back to minus 0.12% after briefly reaching zero for the first time since March 2020.
With US consumer price inflation estimated at 8.5% for March, the Federal Reserve last month raised its key overnight interest rate to a ceiling of 0.50% per annum after leaving it between zero and 0.25% since the Covid Crash in global financial markets of two years ago.
Betting on interest-rate futures tracked by the CME derivatives exchange now sees a 9-in-10 chance of being set at 1.75% after the US central bank's June meeting.
December's meeting then shows a 95% certainty of putting rates at 3.00% or above says its FedWatch tool.
Back in physical bullion, the UK gold price in Pounds per ounce briefly rallied back to Easter weekend levels at £1514 today as Sterling fell on the FX market following news that UK retail sales sank in March as consumer prices jumped, before falling back £15.
Gold priced in Euros also erased all of last week's gain, trading at €1790 as wrangling continued over Germany's support – or lack of – for Kyiv vs. Moscow, with the Bundesbank warning that banning imports of natural gas from Russia could cost the Eurozone's No.1 economy some 5 percentage points of GDP.
No.2 Euro economy France goes to the polls Sunday to choose between incumbent 'centrist' president Emmanuel Macron and 'far right' challenger Marine Le Pen, whom he accused in their only televised debate of relying on Russian funds.
"Thus far, gold prices have remained extremely resilient against an aggressively hawkish Fed," says Canadian brokerage T.D.Securities.
"[But] safe-haven flows are likely to subside as the fear trade dissipates [and] Comex shorts have also largely been wiped out, further removing some fuel for price strength."
"Interest rate hike expectations continue to move up," Reuters quotes one spread-betting bookmaker's analyst.
"As a result, yields are moving higher and the Dollar is trading stronger, all potential strong challenges to gold at this point."