END_OF_DOCUMENT_TOKEN_TO_BE_REPLACED

GOLD and SILVER fell into the weekend in London trade Friday, slipping back from their Russia-Ukraine spikes as Moscow vowed to press ahead with its invasion in the face of international condemnation.
European stock markets rallied and longer-term interest rates rose again, nearing 30-month highs on US Treasury bonds, as energy prices rebounded from another sharp drop from their recent supply-and-sanctions shock rises.
Gold priced in Dollar cut its weekly gain to $20 per ounce at $1966, down almost $100 from Tuesday's assault on summer 2020's all-time record.
Silver prices meantime erased the week's earlier 5.6% jump, trading back at $25.50 per ounce.
"When we see a short-term safe-haven bid driving gold, it tends to be short-lived," says Suki Cooper, head of precious metals research at bullion market-maker Standard Chartered.
But here in March 2022, "any sell-off – whether driven by profit-taking in gold – has been quite well supported [and] viewed as a buying opportunity."
With speculation in gold derivatives contracts driving the jump so far, "Now we're slowly starting to see some of that ETF demand coming back into the market," Cooper adds, with global inflows to gold-backed ETF trust funds already reversing 90% of 2021's outflows since New Year.
Giant gold ETF the SPDR product (NYSEArca: GLD) yesterday saw light liquidation for a 2nd day running, with the number of shares in issue falling another 0.4% from Tuesday's 12-month high.
Silver's largest such ETF, the iShares trust (NYSEArca: SLV) meantime headed for its 3rd consecutive weekly outflow, shrinking by 0.5% on Thursday.
Longer-term, concludes Cooper at StanChart, "We see the longer-term relationship for gold remaining intact, and that is its correlation with real yields." 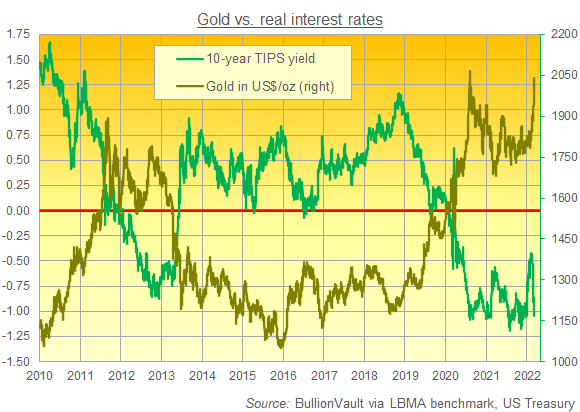 The inverse relationship between gold prices and real US interest rates – as forecast by the yield on 10-year Treasury inflation protected securities – has strengthened sharply in March, reaching its strongest on a rolling 21-day correlation since August 2020.
Tending to rising when real rates fall, the gold price now shows an r-squared of 75.9% with the yield on 10-year TIPS, well above its 5-year average of 38.3%.
"Anyone who says they can tell you where gold or anything will be in a week's time is being economical with the facts," Reuters quotes a spread-betting analyst today.
"Heightened geopolitical and economic risk are keeping the backdrop increasingly supportive in the short-term," says a note from Australasian bank ANZ, but "higher gold prices could weaken physical offtake in the Asian market."
Retailers in China began reporting heavy customer selling last week, with the price for wholesale bullion landed in Shanghai now averaging a $2 per ounce premium to quotes in London – heart of the global precious-metals market – since Monday.
That's barely 1/4 of the typical incentive for new imports.
Discounts in India – the No.2 gold consumer nation – have meantime worsened towards $60 per ounce versus new import prices according to major dealer RiddiSiddhi Bullion.
That suggests the weakest domestic demand versus current supply levels since summer 2020, and contrasts with last year's strong rebound from those Covid shutdowns, with total imports of gold bullion into India jumping above 1,000 tonnes in 2021 acording to trade body the GJEPC.