END_OF_DOCUMENT_TOKEN_TO_BE_REPLACED

GOLD PRICES fell to new 8-month lows against a rising US Dollar on Tuesday, dropping to $1707 overnight before rallying to unchanged for the week so far at $1730 per ounce as platinum also rallied and silver struggled at 5-week lows.
Borrowing costs for almost every government worldwide rose once again but held below last week's multi-month and multi-year highs.
Inflation forecasts in the bond market also rallied, reducing the real rate of interest, as the US Senate prepared to debate new President Joe Biden's $1.9 trillion Covid relief and stimulus plan, now shorn of his Democrat Party's previous hopes to more than double the minimum wage to $15 per hour.
With Asian stock markets falling Tuesday morning, "There was little respite for the precious complex in Asian trade today as metals remained heavy against a stronger Dollar," says a trading note from Swiss refining and finance group MKS Pamp.
European equities then rose despite weak retail sales and jobs data from No.1 economy Germany plus an extension to its Covid lockdown, while New York stock futures also rose, pointing to another test of last month's fresh record highs in the S&P500.
"The reflation trade has greatly affected gold's momentum," says the precious-metals team at French bank and London bullion market maker BNP Paribas, "and many investors that were looking to exit slowly at better prices are now throwing the towel."
Both the largest 2 gold ETFs and the largest silver-backed trust fund saw further liquidation yesterday, shrinking the GLD and IAU gold products to their smallest since May and October respectively.
The iShares SLV ETF extended what has now become 3 weeks of net outflows following the Reddit Ramp calling for a 'short squeeze' in the metal.
With real 10-year US Treasury yields falling back to minus 0.73% on Tuesday – the lowest in almost a week – gold prices stabilized around last Friday's finish above $1730 per ounce.
Platinum also steadied at last weekend's level, trading back at $1190 – the highest since mid-2016 when reached on the way up to 6.5-year highs above $1300 three weeks ago.
Silver in contrast slipped to its lowest since end-January, dropping 3.8% from last weekend to hit $25.87 before rallying 50 cents but remaining over 12% below last month's spike to 2013 levels at $30 per ounce. 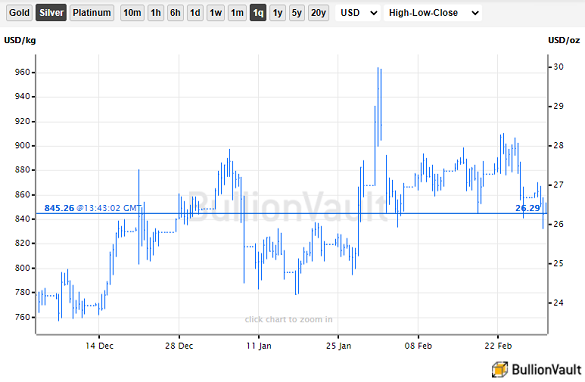 Crude oil meantime stemmed the last week's 6.8% drop, rallying to $63 per barrel of Europe's benchmark Brent ahead of tomorrow's meeting on output quotas for the Opec+ cartel of producer nations.
World No.1 oil producer Saudi Arabia escaped direct censure last week by key ally the USA after a CIA report accused Crown Prince Mohammed bin Salman of ordering the 2018 murder of journalist Jamal Khashoggi in Istanbul – a claim which "does not rise to anywhere close to proving the accusation beyond reasonable doubt" according to Riyadh's ambassador to the United Nations, but one now being pursued by a criminal complaint laid in Germany's courts.
Austria and Denmark today said they're starting a "partnership" with Israel to buy its Covid vaccine directly, blaming the European Union's medicines agency for being slow after newer EU states Slovakia, the Czech Republic and Hungary moved to order vaccines directly from Russia and China.
UK Gilt yields meantime rose to 0.76% on 10-year debt, up from 0.20% at the start of the year, ahead of tomorrow's Budget presentation by Finance Minister Rishi Sunak, widely expected to extend the furlough scheme now supporting 1-in-5 workers and also the stamp-duty holiday for home buyers while also raising tax perhaps on larger corporations.
Covid-related UK deaths fell by 1/4 in mid-February from the week before, new data said Tuesday.
With more than 1-in-3 adults now receiving at least a first dose of Covid vaccine in the UK, schools across England are set to open amid a regular mass Covid testing regime next Monday.
The UK gold price in Pounds per ounce today rallied from a new 11-month low at £1230 per ounce – down 22.0% from August's record high – while the Euro gold price retouched last week's low at €1420.