END_OF_DOCUMENT_TOKEN_TO_BE_REPLACED

SILVER outpaced GOLD prices yet again Thursday, driving the ratio of the yellow metal in terms of its more industrially useful cousin back down towards 2014 levels as the sell-off in government bonds continued amid stronger economic growth and inflation forecasts as expectations for the Covid Crisis to retreat continue to rise.
Global stock markets rose further despite longer-term borrowing costs reaching the highest since New Year 2020 as did crude oil, which peaked above $67 per barrel of European benchmark Brent.
Ten-year US Treasury yields today hit new 12-month highs at 1.45%.
So-called "real yields" on 10-year inflation-protected bonds rose to the highest since early July at minus 0.75%.
Despite also paying no yield, like gold, silver prices meantime held steady above last week's finish at $27.30 per ounce today, rising towards $28 even as gold fell again, erasing the week's earlier gains to trade back below $1780.
Together that pushed the Gold/Silver Ratio of the 2 former monetary metals' prices down to 64.0, only just above the 6.5-year low hit on this month's Reddit Ramp called for a 'short squeeze' in silver, which now finds three-fifths of its annual demand from industrial and technology uses.
That figure is below 10% for gold. 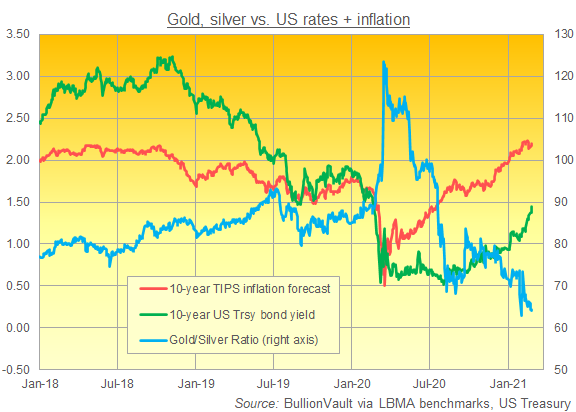 "Volatile session for the precious as rising bond yields continue to affect the markets," says the Asian trading desk at bullion refining and finance group MKS Pamp.
With traders "straight on the offer [to sell] as the greenback spiked higher and 10 year Treasury yields climbed above 1.4%, gold was dumped" within $20 per ounce of Friday's 7-month intraday low for Dollar investors at $1760.
Gold priced in the 19-nation Euro meantime tested last Friday's 11-month low at €1455 as Germany's 10-year borrowing costs rose to the least negative since New Year 2020 at minus 0.26% per annum.
Yields on Japan's 10-year JGB today reached the highest since September 2018 above 0.14% while Australia's touched April 2019 levels above 1.83%.
Austria's 100-year bond, issued last year with a coupon paying 0.85% per annum, has now sunk one-third in price from its December peak at €140 per €100 of debt due for repayment in 2120.
The UK's 10-year Gilt offers now buyers a yield of 0.78%, up from the record low of barely 0.10% offered as Gilt prices peaked last summer with gold in Sterling setting all-time highs above £1575.
The UK gold price in Pounds per ounce today fell to new 11-month lows beneath £1260.
"It's a statement of confidence on the part of markets that we will have a robust and ultimately complete recovery," said US Fed chair Jerome Powell to lawmakers in his regular testimony ending Wednesday this week.
"The Fed faced a tail risk during the Covid crisis of potential deflation," MarketWatch quotes Dutch bank ING's economist for the Americas Padhraic Garvey.
"They very successfully are turning that into a tail risk of inflation. They want [it] to happen."
While QE has sought to ease longer-term interest rates lower by buying bonds, the Fed last July denied it was planning to adopt "yield curve control" like Japan or Australia.
The giant silver-backed iShares Silver Trust ETF (NYSEArca: SLV) meantime held unchanged in size Wednesday after expanding 1.3% on Tuesday.
Investor flows were again negative however in gold's GLD and IAU products, with the 2 largest  gold-backed ETFs shrinking by 0.4% and 0.2% respectively.