END_OF_DOCUMENT_TOKEN_TO_BE_REPLACED

GOLD PRICES rallied back above $1800 per ounce in late-London trade Friday after the official US jobs estimate flatly contradicted earlier data showing strong growth for January.
Silver meantime cut its loss for the week to less than 25 cents but still showed an 11.0% loss from Monday's 8-year high of $30 per ounce following the call on chatroom Reddit to "squeeze the shorts".
Split down party lines, the US Senate voted 51-50 on Friday to move ahead with approving new President Joe Biden's $1.9 trillion American Rescue Plan stimulus.
Wednesday's ADP report had said US jobs grew over 3 times faster last month than analysts forecast, but the Bureau of Labor Statistics now says net hiring was in line at just 49,000.
The US Dollar fell on the news, losing 0.4% from yesterday's 2-month highs against its major peers on the FX market.
US Treasury bond yields also edged down, retreating 1 basis point from Thursday's test of the highest 10-year rate since last March's Covid Crisis at 1.15% per annum.
Reaching $1805 per ounce, that saw the Dollar gold price rebound $20 from yesterday's 2-month lows but hold on track for the 4th weekly decline in 5 weeks so far in 2021.
"Gold is not without investment support at present," says Jonathan Butler at Japanese conglomerate Mitsubishi, "with ETFs holdings remaining at a high level and speculative futures at around 80% of the all-time high on a gross and net long basis.
"Physical demand for gold in China has [also] begun 2021 strongly, with sales of bullion on the Shanghai Gold Exchange rising by 33% in the first 6 weeks of the year despite average local prices being 11% higher."
Dollar-equivalent prices for bullion landed in China – the metal's No.1 household consumer – slipped to $5.30 per ounce above London quotes on Friday.
But with Lunar New Year holidays starting next Thursday and Valentine's Day a week Sunday, Shanghai premiums set the highest weekly average at $6 per ounce since mid-January 2020, just as the scale and speed of the novel-coronavirus outbreak in central China's Hubei province began to become clear. 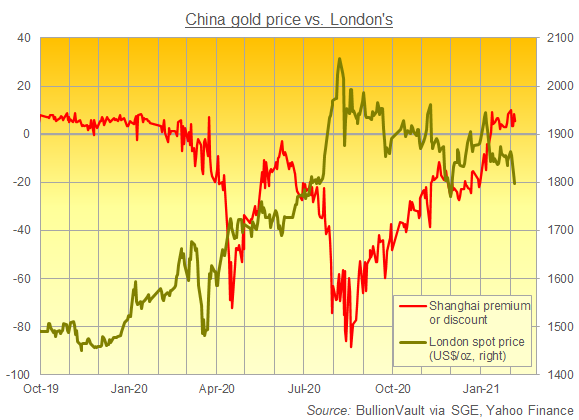 Over in Western bullion-backed trust funds meantime, the GLD and IAU gold ETFs closed Thursday unchanged in size from Friday last week, while the SLV silver trust held on track for its 3rd consecutive weekly expansion, swelling some 9.5% from last Friday with a huge inflow needing 1,783 tonnes of additional backing.
Even so, the SLV has still now shrunk 2.7% from Tuesday's new record size, sending 562 tonnes back to the bullion market, some 8.5 days of 2020's global mine output.
"Silver appears to have recovered from its momentary spike as excessive pumping by activist retail investors gave way to rapid dumping by more seasoned market participants," says Butler at Mitsubishi.
Back at $26 silver "is now almost back where it started," he adds, "once again demonstrating that this large and liquid market is not one that is susceptible to being squeezed."