END_OF_DOCUMENT_TOKEN_TO_BE_REPLACED

GOLD and SILVER recovered Wednesday in London from an overnight dip, rising as the Dollar slipped ahead of today's Federal Reserve decision on US interest rates – the first since it finally raised the floor from 0% to 0.25% after 7 years last month.
China's stockmarket had earlier lost another 0.5% after new data showed industrial profits in the world's second largest economy fell for the first time this century last year.
European equities then fell – and US equity futures pointed lower – as tech-giant Apple (Nasdaq:AAPL) dropped almost 4% in pre-market trade after warning that iPhone sales are set to drop in 2016, ending 8 years of growth.
Gold on Tuesday "broke [a] key technical pivot at $1110," says a technical analysis from bullion bank Scotia Mocatta – "a very bullish development [and] we expect a test on $1136."
"Silver has followed gold higher," adds Japanese conglomerate Mitsubishi's precious metals analyst Jonathan Butler, "outperforming its sister metal in the process having recaptured the 50-day moving average at $14.09."
"Silver seems to have found a floor," said analysis from French investment and bullion bank Societe Generale's technical team earlier this week, pointing to "the down sloping trend-line of $13.80-13.50 where it has been possibly forming a [bullish] Inverted Head and Shoulder pattern.
"The pattern will be confirmed on a break above 14.40 and it projects a potential target at $15.00-15.25 [per ounce]."
Wednesday saw silver prices regain half of last night's 2.2% drop from 7-week highs above $14.50, trading back up to $14.47 per ounce.
Basis Tuesday's benchmark pricing, however, the Gold/Silver Ratio of the two precious metals' relative prices had hit a new 7-year high on its 1-month average.
Gold's 1-month average price has only been more expensive against silver on 74 days during the last 20 years. 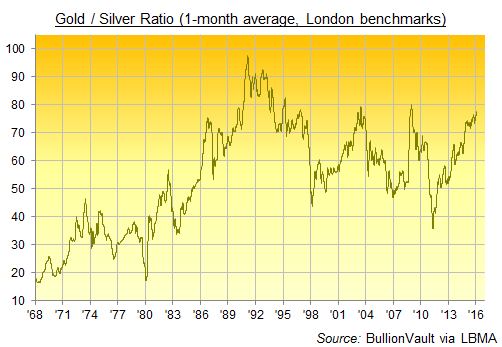 "If the Fed were to signal a break [today] in the rate-hike cycle," says a note today from the commodities team at Commerzbank in Germany, "this would presumably lend further buoyancy to gold."
But "we believe that the recent change in US interest expectations will likely reverse in the near future," counters a weekly note from precious metals analysts Metals Focus.
Moreover, and despite this month's rally in the size of the SPDR Gold Trust (NYSEArca:GLD), "The equity markets' rout has not materially changed investor interest in gold, " and while Chinese investors "have borne the brunt of weak equities...the feedback we receive from the market suggests the direct effect of this on gold demand has been limited.
"A possible revival of distress selling, both of investment holdings and jewellery, could add further pressure."