END_OF_DOCUMENT_TOKEN_TO_BE_REPLACED

GOLD PRICES popped but fell back Wednesday towards the lowest in 2 weeks amid mixed inflation and economic data ahead of today's key US Federal Reserve statement on tapering and interest rates.
With inflation in the USA – the world's largest economy – running at 3-decade highs, retail sales excluding autos rose only 0.3% in November according to the Census Bureau today, sharply below October's 1.8% monthly growth and way below analyst forecasts of 1.0%.
Inflation in the UK meantime blew past analyst forecasts to read 5.1% on the Consumer Price Index, very nearly the fastest inflation for households in the world's 5th largest economy since early 1992.
The longer-running but now unofficial Retail Price Index showed a rise of 7.1% from November last year, its sharpest jump in 3 decades.
Benchmark UK government bonds were today offering 1/10th that much per year in yield, and the last time that RPI inflation rose this fast – back in April 1991 – 10-year Gilts were offering 12.7% annual yield.
Today's inflation news saw the UK gold price in British Pounds bounce less than £5 from near 2-week lows at £1331.50 per ounce. 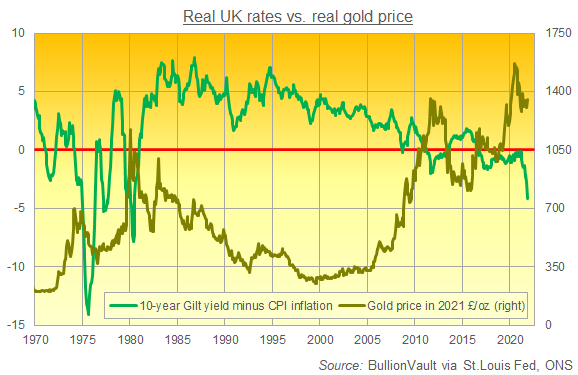 Inflation in both Italy and Spain – the 19-nation Eurozone's 3rd and 4th largest national economies – meantime missed expectations for November, coming in at 3.9% and 5.5% per year respectively on today's data releases.
Eurozone No.2 France matched forecasts with its cost of living up 3.4%, as did Canada with a 3.6% annual rises across its 'core' consumer price index.
"Inflation is a double-edged sword" for gold prices, Reuters quotes one derivatives broker.
"[While] gold is viewed as an inflation hedge, in reality we're seeing the opposite where hot inflation could mean faster interest rate hikes."
Betting on today's decision in the futures market now puts an 8% chance on the Fed hiking from zero at this December 2021 meeting, something that awarded a 1-in-5 chance by traders as inflation took off this spring but discounted to no chance across most of last month.
"The Fed could [still] announce a doubling of the pace of its bond-buying taper and lay out a steeper path of interest-rate hikes" for 2022 reports news and data agency Bloomberg of its Economics department's outlook for today's announcement.
At it is, the news-wire goes on, "Bullion is heading for its first annual loss in three years amid diminishing monetary support from central banks."
"Monetary policy needs to withdraw the exceptional support provided during 2020-21," says the latest advice to the UK's Bank of England from post-WW2 global finance agency the International Monetary Fund.
"Policymakers will have to weigh risks in the choosing the pace...[because] early action could slow the recovery [but] it would be important to avoid inaction bias, in view of costs associated with containing second-round impacts [ie, wage rises]."
Instead of tightening policy, however, the Bank of England this week moved to scrap a rule for UK mortgage lenders requiring that new borrowers can afford a 3-percentage-point rise in interest rates before being approved for a loan.
UK house prices on sale fell £3,000 in October from September, Land Registry data said today, but remained more than 10% higher from 12 months earlier.
"Fiscal policy should retain an important role in responding to large macroeconomic shocks," the IMF adds, advising the UK Government of Boris Johnson to "bring forward some fiscal tightening from FY23-24 to FY22-23 to help contain demand in the short run," thereby helping ease inflationary pressures.
Germany's new Chancellor, Olaf Scholz, said today he wants to grow the No.1 Eurozone economy's fiscal debt to help drive "the biggest transformation of our industry and economy in at least 100 years" in response to climate change.
The Netherlands will also grow its government spending to accelerate the switch to green energy and renewables, the new coalition of re-selected prime minister Mark Rutte says, promising an additional €35 billion over the next 10 years.
Silver prices meantime struggled below $22 per ounce after hitting their lowest in 11 weeks overnight ahead of the US Fed policy statement.
Global stock markets also struggled to rally after slipping for 2 sessions running, while major government bonds held little changed in price overall, keeping longer-term interest rates markedly below the pace of inflation across the developed world.