END_OF_DOCUMENT_TOKEN_TO_BE_REPLACED

GOLD PRICES were little moved inside a tight trading range versus most major currencies on Wednesday as rising bond yields and interest rates were offset by fresh record highs in energy prices, spurring fresh fears of long-term inflation as European stock markets fell hard.
Western government bond prices fell again, led by a sell-off in UK debt, as the wholesale cost of UK electricity leapt 40% this morning alone on what one commentator suggested was stop-loss and short-covering moves by formerly bearish traders.
European gas prices also jumped yet again amid accusations that Russia is deliberately capping supplies.
Gold priced in US Dollars bounced $6 back to unchanged for the week so far at $1760 per ounce
Euro gold touched 3-week highs at €1525 before edging back €5 while Germany's Dax fell 1.9% as Berlin's bond yields hit their least negative since late-June.
London's FTSE100 share index lost 1.4% as the drop in Gilt prices drove the UK's longer-term borrowing costs up to multi-year highs.
But strength in Sterling – thanks to the UK currency offering the highest bond yields of any Western European nation – kept the UK gold price in Pounds per ounce at £1295, down by £5 from the weekend. 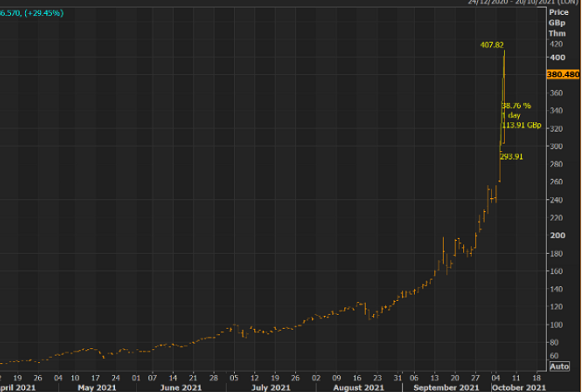 "To maintain low inflation and support maximum sustainable employment," New Zealand today became the 2nd major rich-world economy to hike its central-bank interest rate after Norway moved from 0% to 0.25% last month.
"Economic uncertainty remains elevated due to the prevalent impact of Covid-19," the Reserve Bank said, "[but] cost pressures are becoming more persistent and some central banks have started the process of reducing monetary policy stimulus."
Moving up to 0.50% from its own record low of 0.25% today "further reduced monetary stimulus" after the RBNZ in July halted additional new QE money creation and bond buying, and then tightened loan-to-value ratios for new mortgages 2 weeks ago.
But the move proved "anti-climactic" for the New Zealand Dollar, says Reuters, with NZD recovering less than 1/3rd of this week's prior drop versus the US Dollar to trade almost 8% below February's 3.5-year high.
Even so, "The RBNZ is likely to be a year ahead of the US Federal Reserve, and possibly two years ahead of [Australia's] RBA," reckons Kiwibank chief economist Jarrod Kerr, and "the widening interest rate differentials...point to further upside in the Kiwi Dollar."
"You see what is happening in Europe. There is hysteria and some confusion in the markets," said Russian President Vladimir Putin yesterday, urging a "smooth transition" to green energy by slowing the pace of "cut-backs in investments in the extractive industries."
But "Gazprom is the forward arm of the Russian state's energy policy," countered Poland's Prime Minister Mateusz Morawiecki today, speaking at a meeting of EU leaders in Slovenia.
"We can see where the dependence on Gazprom and the dependence on Russia lead to."
"Russia is fulfilling its long-term contracts," according to EU Energy Commissioner Kadri Simson yesterday, but some European countries have asked the economic bloc to review Moscow's influence while also calling for an EU response to the crisis, reforming energy-market regulations and making joint gas purchases while raising consumer subsidies and offering energy tax breaks.
Nord Stream 2 AG – the Swiss-registered division of Russia's Gazprom still awaiting regulatory approval from the EU for its controversial gas pipeline across the Baltic to Germany, diverting supplies currently piped through Ukraine – said Monday it has begun filling the pipe as part of "technical tests".
Russia last year supplied 43% of the 27-nation European Union's gas imports.
The UK keeps less than 2% of its annual gas demand in storage, relying on "just in time" spot-market prices and supplies versus an average 25% stored by the EU27.
"In order to further increase Poland's financial security," said Warsaw's central bank chief Adam Glapiński today, "we will certainly strive to increase our gold holdings...[perhaps adding] a further 100 tonnes in 2022" to the 230 tonnes already held, much of it stored in London bullion vaults.
After repeatedly calling the idea of raising interest rates "risky" since early summer, Glapiński also said that "the time to adjust monetary policy is approaching.
"The NBP will not allow the persistence of elevated inflation [and] cannot exclude that the price increases caused by supply factors will prove to be more durable than we previously expected."