END_OF_DOCUMENT_TOKEN_TO_BE_REPLACED

GOLD PRICES held a small weekly gain versus all major currencies but the Japanese Yen lunchtime Friday in London, trading $2 higher at $1470 per ounce as world stock markets rallied to extend their 6-week winning run.
Rising 1.8% from last week's 3.5-month low of $1445 per ounce, gold prices neared their highest weekly close in 3 for Euro investors at €1330.
The UK gold price in Pounds per ounce rose to £1141, also a 7-year high when reached this July.
Major government bond yields meantime eased back Friday, cutting longer-term US interest rates to their lowest Friday level in 3 weeks at 1.755% on the 10-year Treasury.
German 10-year yields also fell to their lowest since the start of November as investors bought Bunds, retreating to -0.362%.
"We underestimated the aggressiveness of the central bank response" to slowing global growth, said a note from US investment bank and London bullion market-makers Goldman Sachs this week, reviewing its initial 2019 outlook.
Saying that negative rates and the return of QE has helped boost world equity prices, Goldman's analysts have also been surprised by "the willingness of [stock] markets to pay much higher multiples even as global earnings growth turned negative.
"[But] we are skeptical that central banks can pull off the same trick twice" in 2020.
With US unemployment falling to half-century lows this year, initial claims for jobless benefits last week held at the highest in 5 months, new data showed yesterday.
After Eurozone consumer confidence came in less awful than expected for November on Thursday, manufacturing activity across the 19-nation currency zone today showed a slower pace of contraction so far this month.
The preliminary Markit PMI for November came in at 46.6, up from October's final 45.9 reading but still below the crucial 50.0 level for the 10th month running.
It also puts the overall Eurozone economy "near-stalled" for the 3rd month running thanks to the weakest services-sector growth since New Year. 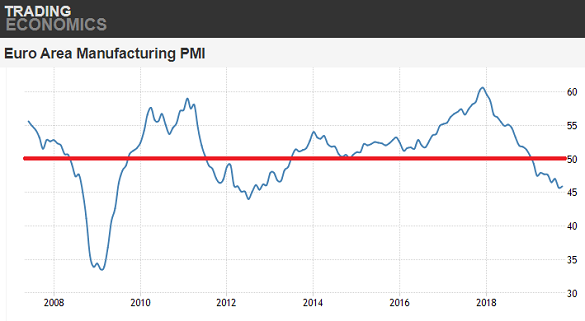 Beijing's official data agency today revised China's 2018 GDP figure upwards today, "keeping it on track to doubling by 2020 from 2010," according to Reuters.
With the People's Bank cutting its key interest rate twice this week, the politburo's target growth for 2019 remains above 6.0%, the 2-decade low in annual expansion hit during the July-to-September quarter.
"When necessary we will fight back, but we have been working actively to try not to have a trade war," said China's President Xi Jinping at a conference today, urging Washington "to work for a 'phase one' agreement on the basis of mutual respect and equality."
Back in gold, "Chinese selling abated somewhat" on Friday, says Swiss refining group MKS Pamp's daily note, as the on-shore premium for bullion landed in the world's No.1 consumer nation "stabilised" around $3 per ounce above global quotes after sinking to 18-month lows, reflecting weak domestic demand versus supply.
The 'dead cert' of no Fed rate change at next month's meeting has now receded to a 95% chance, according to bets made through the CME derivatives exchange, with 5% of speculative contracts now backing a rate hike back up to 2.00%.