END_OF_DOCUMENT_TOKEN_TO_BE_REPLACED

GOLD PRICES reacted to action in the currency markets on Wednesday, holding firm in US Dollar terms near last weekend's 5-month highs but rising for Euro investors while falling in UK Pounds as Sterling rose on the strongest UK inflation data since autumn 2011.
Global stock markets slipped, with European bourses and Shanghai unchanged while the UK fell 0.4% and Tokyo closed 0.6% lower, while Dollar gold prices traded at $1863 per ounce and energy prices retreated from their latest jump in the commodity markets.
Silver lagged gold prices for a 3rd session running, trading 0.8% lower for the week so far in Dollar terms at $25.09 per ounce.
The UK today followed France and Italy in reporting that October saw the fastest pace of annual inflation in consumer prices for a decade, with the CPI rising 4.2%.
With the Bank of England formally tasked with targeting 2.0% inflation, today's data didn't trigger an explanatory letter from Threadneedle to Downing Street, because Governor Andrew Bailey already had to write and justify keeping Bank Rate at 0.1% in the face of 3.2% annual inflation in August.
"I agree with your assessment," replied UK finance minister Rishi Sunak earlier this autumn.
"The recent period of above-target inflation is driven partially from base effects, rising commodity prices, global supply bottlenecks and shortages (particularly of semiconductors) and the increase in energy prices."
"It will take some time," says the latest inflation "explainer" from the European Central Bank, "but this imbalance between supply and demand will gradually fade away, as companies produce more microchips and build new vessels."
With the Pound rising on the FX market after today's UK inflation data, the UK gold price in Pounds per ounce slipped to £1385, down £10 from yesterday's intraday peak but only £2 per ounce below last week's finish, when gold bullion set its highest Friday fix at the London PM benchmarking auction of 2021 to date for UK investors and savers.
In contrast, gold priced in Euros rose back towards yesterday's new 54-week highs on Wednesday, edging back above €1649 per ounce. 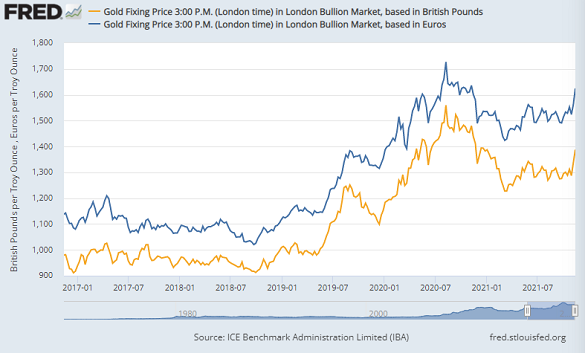 Inflation across the 19-nation Eurozone – where the ECB has charged commercial banks putting money on deposit a negative interest rate of 0.5% per year since September 2019 – was today confirmed at 4.1% per year by official data agency Eurostat, matching the single currency's previous inflation peak of July 2008.
That saw Euro government bond prices slip, edging longer-term borrowing costs slightly higher across the region.
Having jumped however ahead of last week's surprise "no change" decision on rates at the Bank of England, UK bond yields didn't rise on Wednesday's news, with 10-year government borrowing costs holding flat at 0.98% per annum – the middle of the last 2 months' trading range – while shorter-term Gilt yields edged lower, with 5-year rates slipping to 0.74%.
That's 10 basis points below late-October's 2.5-year high.
Betting that the US Federal Reserve will still hold its key interest rate at 0.1% by next June has fallen to new lows following last week's shock inflation data, putting the odds of no change down at just 1-in-3 according to the CME derivatives exchange's FedWatch tool.
"I expect inflation to moderate as the pandemic recedes," said San Francisco Federal Reserve Bank president Mary Daly in a speech Tuesday, rejecting calls for an 'early' rate rise in the face of CPI inflation hitting 3-decade highs as "pre-emptive".
"Preemptive action isn't free," said Daly, a voting member of the Fed's FOMC.
"Like all insurance, there are costs. And policymakers must balance these costs against the risk of waiting."