END_OF_DOCUMENT_TOKEN_TO_BE_REPLACED

GOLD PRICES sank into London's 3pm benchmarking auction on Friday, turning a 0.4% weekly loss into a drop of 1.8% as longer-term interest rates rose after new US data showed inflation holding at 3-decade highs even as economic growth slows sharply.
Industrial, energy and agricultural raw materials also fell, pulling Bloomberg's Commodities Index down 3.2% from this week's new 10-year high.
Global stock markets also fell, edging back from Thursday's fresh all-time on the MSCI World Index, as government bond prices fell, driving borrowing costs higher.
Bond yields rose fastest on Eurozone government debt, leaping to 15-month highs on Italy and Greece's 10-year notes and testing May's multi-month highs for Germany, France and Spain.
The 19-nation Eurozone has seen consumer-price inflation of 4.1% per year in October, Eurostats said Friday, matching summer 2008 at the worst rate since 1991.
New figures then showed US employment costs surged ahead of analyst forecasts in Q3, up 1.3% from the prior 3-month period.
That came even as personal incomes fell 1.0% month-on-month in September and the cost of living – on the 'core' PCE measure – held at August's 3-decade high of 3.6% per year. 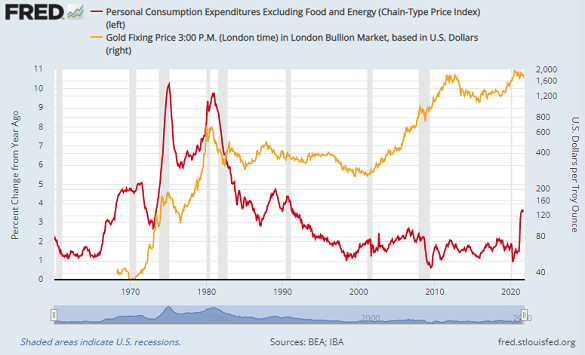 More than 1-in-3 bets on the Federal Reserve's short-term rates now foresee a rate hike in March, with 2/3rds of bets on June now predicting higher rates from today according to the CME's FedWatch tool.
Plunging almost $25 between midday and 3pm in London, gold prices for US investors then rallied $10 per ounce to $1781.
Silver also reversed a little of its lunchtime drop, heading into the weekend 1.5% below last Friday's finish at $23.88 per ounce.
This week's volatility in gold was stronger again for Euro investors, with the precious metal losing 2.3% from Thursday's high to Friday's low, heading for a €20 weekly loss at €1530 per ounce.
Ahead of next week's Bank of England decision on interest rates, the UK gold price in Pounds per ounce meantime whipped 2.0% across yesterday and today heading for a £20 weekly drop at £1293.
"Following a rampant first half in 2021, economic growth may be rolling over in the US and elsewhere," says a report from the mining industrys's World Gold Council. "But inflation remains a lingering, if not growing, concern.
"Gold hasn't benefited from record-low real rates and high inflation in 2021. We believe this has to do with rosy expectations about inflation, growth and equities.
"Record low yields [ie, high bond prices] might constrain bonds' hedging potential in a risk-off event, offering gold an opportunity to command some of those defensive flows, should a shock to risk assets materialise."
The real interest rate implied by 10-year inflation-protected US Treasury bonds rose Friday to minus 0.97% per annum, the highest in over a week and 14 basis points above Wednesday's 12-week low.
TIPS yields haven't risen that fast in 2 days since February, when gold lost $60 on its way towards March's 10-month lows beneath $1680 per ounce.
The US economy yesterday missed analyst forecasts, with the first official estimate of GDP growth coming in at just 2.0% annualized for July to September, down from 6.7% in the second quarter and below consensus predictions of 2.7% thanks to the global supply-chain crunch hitting output as the Delta wave of Covid also hit.
World No.3 economy Japan saw industrial output sink 5.4% in September from August, new data said yesterday.
But unemployment in Germany has fallen however, slipping to 5.2%, the lowest since March 2020 – back when the global Covid pandemic hit Europe – after the wider Eurozone currency union saw GDP growth in the 3rd quarter beat analyst forecasts at 3.7%.