END_OF_DOCUMENT_TOKEN_TO_BE_REPLACED

GOLD PRICES fell against all major currencies as Asian stock markets dropped early Thursday before rallying in London but holding on track for the lowest weekly close in US Dollar terms since April 2020 as the GLD ETF shrank yet again and longer-term interest rates rose further.
With harmonized consumer-price inflation across the 19-nation Eurozone running at currency-union records of 9.9% on the latest data, Germany's 10-year borrowing cost today rose above 2.45% for the first time since 2011 while Italy's 10-year yield tested last week's new decade high of 4.81% per annum.
The UK's Gilt market rallied in contrast, edging London's 30-year borrowing costs down to 3.90% from September's spike above 5.10%, as Prime Minister Liz Truss – in post for just 6 weeks after replaced disgraced Brexit-cheerleader Boris Johnson – resigned amid fresh chaos in the ruling Conservative Party.
Inflation in the UK – now the world's 6th largest economy, behind India in US Dollar terms – last month reached a 4-decade high of 10.1%.
UK sales of goods to the European Union have fallen 16% against the likely volume if Britain had remained in the EU, a new working paper from the Economic and Social Research Institute claimed today, with imports from the world's largest free-trade union dropping by 20%. 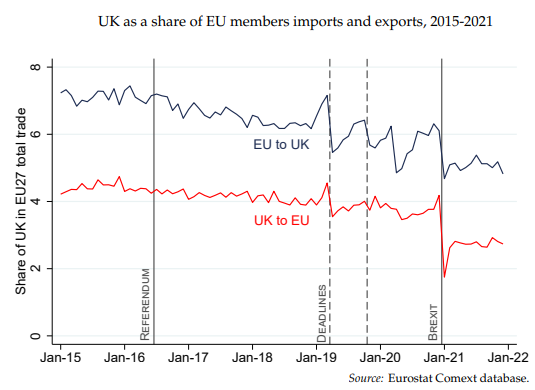 "Gold has been the unexpected loser of the current macroeconomic environment," says data, analysis and ratings agency S&P Global, "with its safe-haven status in direct competition with the US Dollar.
"While market volatility should favor the yellow metal, increasing treasury yields and a strengthening US Dollar, on the back of interest rate hikes, [have] weighed on the gold price."
Gold priced in the Dollar today came within $8 per ounce of last month's 2.5-year low before rallying $10 to trade at $1633 as New York dealing began.
Looking ahead, the consensus view from other analysts collated by S&P still sees gold rallying sharply, reaching $1803 per ounce by year-end on the average forecast, with silver currently expected to close December just below $21 per ounce, well over $2 higher from today.
Silver prices today traded in the middle of this week's range to date, costing $18.55 per ounce for London settlement.
The average delegate's forecast at this week's LBMA conference sees silver prices surging to $28.30 when the association next holds its annual event in 12 months' time.
"Gold below $1691 has reinforced its existing large double top" – the $2000 peak set in August 2020 and then March 2022 – says a technical chart analysis from Swiss bank Credit Suisse.
With that top in place, "we expect gold to come under renewed pressure...[with] the next support seen at $1614, then $1560 and eventually $1451."
Thursday saw the giant SPDR Gold Trust (NYSEArca: GLD) – the world's largest gold-backed exchange-traded trust fund – shrink for a 5th session running, suffering its largest 1-day investment outflow since July and dropping to its smallest size since March 2020, when the global Covid Catastrophe took hold.
Smaller competitor the IAU gold ETF from iShares also shrank for the 5th session running, dropping to its smallest size since July 2020 with its heaviest 1-day outflow in more than 3 years.
The UK gold price in Pounds per ounce dropped on Thursday near its lowest since early-August at £1448 – down more than 8% from the "mini-budget" disaster's record peak – as Sterling rallied again on news of Truss's exit.
The Euro gold price rallied €5 per ounce from last night's 4-week low near €1662.