END_OF_DOCUMENT_TOKEN_TO_BE_REPLACED

GOLD PRICES rose against all major currencies on Monday, while bullion priced in sterling stalled as the pound rallied and UK bonds surged after Chancellor Jeremy Hunt scrapped his predecessor Kwasi Kwarteng’s unfunded tax cuts,  writes Atsuko Whitehouse at BullionVault.
Spot gold prices in the US Dollar climbed 1.2% to $1665 per ounce, after paring almost half of last week’s decline, the biggest weekly fall in two months.
Wholesale bullion in Pounds per ounce rose 0.05% to £1472, as the pound rallied in FX markets. The Euro gold price saw a rise of 0.9% to €1706 this Monday morning.
The newly appointed Chancellor of the Exchequer, Jeremy Hunt, reversed almost all the tax measures announced in Prime Ministers Liz Truss’s mini-budget and scaled back energy subsidies in a desperate effort to calm markets on Monday.
After announcing roughly £45 billion of unfunded tax cuts three weeks ago, the new Chancellor has reversed around £32billion.
Soon after the announcement, Sterling extended early morning’s gains against the US dollar and traded at around $1.13. The pound fell to an all-time low against the US dollar at $1.037 three weeks ago after the bonanza of tax cuts and spending measures threatened to undermine confidence in the UK.
This pushed the UK gold price in Pounds per ounce to hit an all-time-high of £1580. 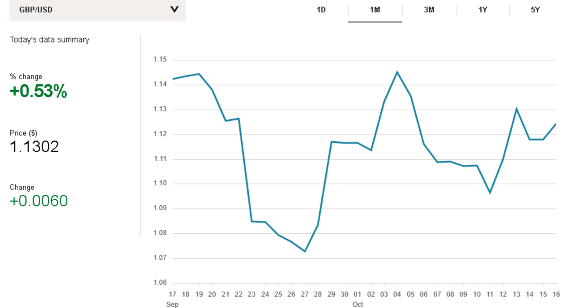 The yield on 30-year bonds dropped when markets opened on Monday morning, fell a further 39 basis points after Mr Hunt’s statement to 4.37%.
The Bank of England ended its two-week emergency bond-buying program on Friday after being forced to intervene to protect pension funds squeezed by volatility in the bond market. The Bank’s Monetary Policy Committee meets on 3rd November to determine its next move on interest rates.
Ten-year US Treasury yields – a benchmark rate for government as well as many finance and commercial borrowing costs – fell 8 basis points to 3.94%, after topping the key 4% level for a second time in two days last week, which was 14-year highs, as September’s inflation reading was hotter than expected. Yields and prices move in opposite directions.
The Dollar index – a measure of the US currency's value versus its major peers – snapped a two-week uptrend by retreating 0.4% this Monday lunchtime.
Gold prices on the Shanghai Gold Exchange meantime continued to show a premium to London, increasing to $35 per ounce on Monday, even as the domestic Yuan price of gold fell to a 6-session low, and the Chinese currency weakened to its lowest US Dollar exchange rate since 2008.
Wholesale bullion in the metal’s No.1 consumer market eased the weekly average to $32 last week from $40 before the Golden Week holiday.
The monthly average premium in September however was $32, the highest monthly level for nearly six years, according to the mining-industry’s World Gold Council (WGC).
"Robust domestic demand has been the most vital factor driving local gold price premium in China," WGC China said.
Gold consumption during the seven-day National Holiday in early October sent a mixed signal about Q4 demand strength. While some retailers saw a boost to anticipated sales, those in cities with renewed COVID resurgences and related restrictions were left disappointed.
The Chinese Communist Party met on Sunday at its twice-a-decade National Congress. China’s president, Xi Jinping, who is expected to be handed a third term, opened the congress, and laid out his vision for the next five years.
During a speech that lasted nearly two hours, Xi hailed China’s “Dynamic Zero-Covid” strategy and gave no hint of shifting policy priorities towards economic growth as some investors had hoped for.
At the last-minute China delayed the release of eagerly anticipated third quarter economic data, including its closely watched gross domestic product growth rate, which were due to be issued in the middle of the 20th Communist party conference.