END_OF_DOCUMENT_TOKEN_TO_BE_REPLACED

GOLD PRICES slipped but held $10 above yesterday's 2-week low of $1642 per ounce in London trade Friday, heading for a steep weekly loss in all major currencies as government bond and equity prices extended their rally from fresh multi-year lows.
Crude oil bounced but held on track for a 3.5% loss from last week, when the Opec+ cartel agreed deep cuts to their combined output to try supporting the market against weakening demand.
Global stock markets meantime rose for a 2nd day, rallying 4.6% from the new 2-year low on the MSCI World index which followed Wednesday's 'hawkish' notes from the US Federal Reserve's latest interest-rate hike meeting.
Heading for a 2.4% weekly loss against the Dollar, gold prices showed a 2.5% drop from last Friday in Euro terms and a 3.5% drop in British Pounds despite Sterling giving back some of Thursday's rally on the FX markets as news broke that Chancellor Kwasi Kwarteng – in role for just 38 days – has been replaced with the UK's fourth finance minister of 2022 so far amid the turmoil following his unfunded tax-cutting budget.
That news saw the yield on 30-year Gilts jump 0.2 percentage points after earlier touching a 1-week low of 4.24% per annum – the highest since 2011 when the Sterling and Gilt sell-off of late-September prompted the Bank of England to intervene with emergency QE purchases it has now ended today.
Yields on all other rich-world sovereign debt retreated in contrast on Friday as their bond prices rallied, with 30-year US Treasury rates falling 0.25 percentage points from Wednesday's spike above 4.0% per annum – the first since 2013 – following Wednesday's publication of Fed minutes. 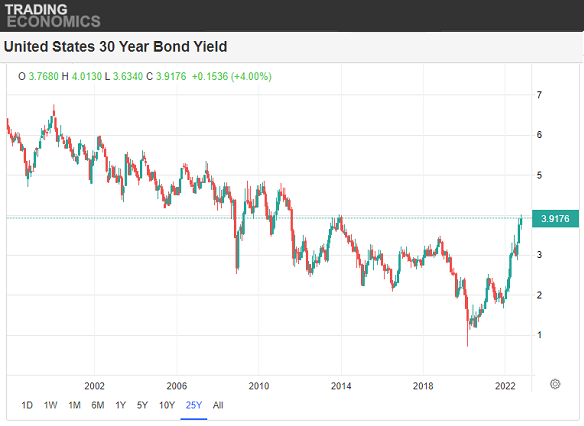 "Inflation is broad-based and unacceptably high," members of the FOMC agreed.
"[Many attendees] emphasized the cost of taking too little action to bring down inflation likely outweighed the cost of taking too much action...even as the labor market slowed."
Betting on US interest rates now puts a 97% certainty on the Fed hiking by another 75 basis points at next month's meeting, taking the Fed Funds rate to a ceiling of 4.0% per annum.
The highest such cost of overnight borrowing since December 2007, the 4.0% level was given zero chance of being reached in November as recently as the start of last month according to data published by derivatives exchange the CME.
"To see a recovery in gold prices," Reuters quotes one spread-betting strategist, "we need to see a reversal especially in the yields, which would then also potentially drive a turn in the Dollar.
Thursday's surprise acceleration in US inflation data, setting a fresh 4-decade high on the 'core' CPI measure, saw the Dollar jump to its highest against the rest of the world's major currencies since late-September's new 2-decade highs.
"Rising inflation intuitively looks good for gold," writes James Steel, chief precious metals analyst at global bank and bullion market-maker HSBC in the latest edition of trade association the LBMA's Alchemist magazine, "but academic literature shows that gold has been an imperfect inflation hedge.
But while gold has "tended not to be directly impacted by food and energy prices...rising food and energy prices have had wider geopolitical and economic consequences that were gold friendly."