END_OF_DOCUMENT_TOKEN_TO_BE_REPLACED

GOLD PRICES fell from last week's 12-month highs on Monday morning in London as the Dollar rebounded and global stocks hit new highs after Hurricane Irma was downgraded to a 'storm' and the weekend passed without North Korea testing any nuclear weapons to mark its national foundation day, writes Steffen Grosshauser at BullionVault.
Spot gold bullion retreated to $1335 per ounce after reaching above $1356 on Friday, while the US Dollar Index climbed from a 32-month low.
Irma has still affected more than 3 million homes on its way to Florida's west coast. Pyongyang said Monday that the US would pay a "due price" if new sanctions against North Korea or its dictator Kim Jong-un were imposed at a UN Security Council meeting being held today.
"Markets seem to have headed into the weekend priced for the worst," Bloomberg quotes Sean Callow, a senior currency strategist at Australian bank Westpac – "a North Korean missile test and maximum financial damage from Irma."
Already by last Tuesday, new data showed late on Friday, betting on gold prices rising had reached the most extreme level amongst hedge funds and other money managers since 2016's Brexit shock.
The week to 5 September saw the 'Managed Money' category of Comex futures and options traders raise their bullish bets on gold prices, net of bearish bets as a group, for the eighth straight week – the longest period of gains since the beginning of 2016.
That took the net long position to 207% of its 10-year average by size, reaching a notional value of more than $33 billion. 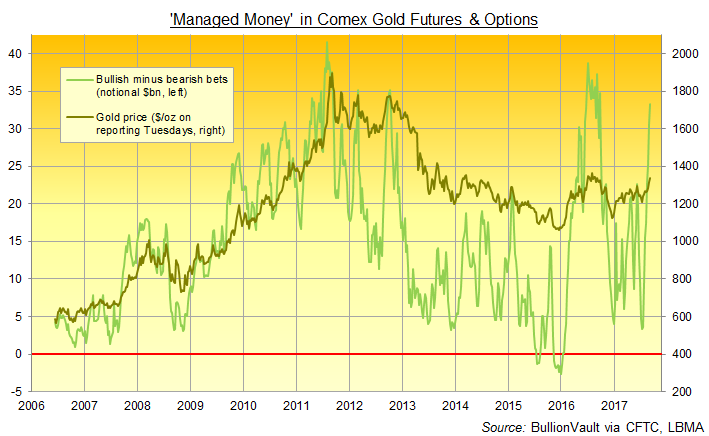 Physical holdings needed to back the world's largest exchange-traded gold fund, the SPDR Gold Trust (NYSEArca:GLD), rose by 0.3% across last week, but slipped on Friday as gold touched new 12-month highs.
"So long as there is still a chance the US central bank pulls the trigger [at next week's meeting] on the higher Fed funds, along with the risk of three more hikes next year, money managers will have difficulties to justify growing long positions past their current extreme levels," according to analysts at Canadian brokerage TD Securities.
But "the major determinant of gold last week was geopolitical tensions," says research chief Mark To at Wing Fung Financial Group in Hong Kong, "[and while] at the weekend we did not see any crisis triggering event...[those tensions] are still with us and the slowing of interest rate hikes and other tightening measures are going to be with us as well."
"The geopolitical risk is already in the price," counters Lakshmi Iyer, Head of Fixed Income and Product at Kotak Mahindra Bank.
"Gold will see an immediate correction if the Korean peninsula crisis ends."
Along with Irma's strength downgraded from category three to one, US Treasury bond prices retreated on Monday as Asian and European equities climbed back towards record highs.
South Korea's Kospi stock index and Japan's Nikkei index rose 0.6% and 1.4% respectively while the Stoxx Europe 600 index also jumped over 1% – the most in more than a week.
In other metals, silver prices tracked gold lower and fell to $17.80 per ounce, down from last week's close at $17.97 after already dropping around 1% after hitting a 4.5-month high in Friday's trade.
Base metals traded on the London Metal Exchange, in contrast, edged higher by an average of 0.5% on Monday morning, led by a 1.25% price jump in zinc.