END_OF_DOCUMENT_TOKEN_TO_BE_REPLACED

GOLD PRICES fell with global stock markets for a 5th session running on Thursday, extending investment losses since US Fed chair Jerome Powell vowed last week to keep raising interest rates to fight inflation as traders bet that the European Central Bank will follow suit with further steep hikes to borrowing costs.
Falling $15 today from August's close – the lowest monthly finish since March 2021 – the gold price in Dollars has now fallen for 5 months running, its longest such decline since summer 2018.
Euro gold also fell towards 6-week spot market lows on Thursday, dropping through €1700 per ounce as the single currency rose on the FX market as yesterday's strong Eurozone inflation data boosted expectations for a move to positive interest rates at the ECB meeting next week.
The UK gold price in Pounds per ounce in contrast held little changed after rising 1.8% in August from end-July's 6-month low to reach £1475.
"Even before the pandemic, protectionism and nationalism were on the rise," said Isabel Schnabel, a member of the ECB's Executive Board, in her speech to last weekend's Jackson Hole policy symposium, vowing "a forceful policy response" to prevent the Great Moderation of the early 21st Century becoming a period of Great Volatility for consumer prices as the world economy risks "fracturing into competing security and trade blocs [with] new and alarming forms of protectionism."
"With [economic] demand far exceeding supply, we do need to get real interest rates above zero," said New York Federal Reserve president John Williams in an interview Tuesday, echoing Fed chief Jerome Powell's Jackson Hole comments on defeating inflation.
European bourses fell again Thursday, down for the 5th session running since Powell's Jackson Hole speech and trading over 7% below mid-August's rally in the EuroStoxx 600 index.
US equities have fallen harder so far on the S&P500 index, losing more than 8% from 2 weeks ago to close Wednesday night at what was a 14-month low when hit in May.
With US inflation above 9% and Fed rates now expected to reach 3.25% three weeks today, "We need to have somewhat restrictive policy to slow demand, and we're not there yet," Williams told the Wall Street Journal.
For gold, "The yellow metal faces significant downside risks" as gold ETF investor outflows continue says precious-metals analyst Suki Cooper at London bullion market-makers Standard Chartered, "[but] it also benefits from tailwinds including recession risk, a price-responsive physical market, already scaled-back positioning, and elevated inflation." 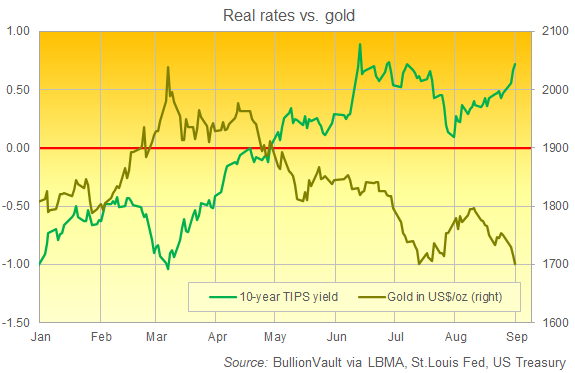 Real interest rates, against which gold prices typically show a strongly negative correlation, rose again Thursday, with the yield on 10-year inflation-protected US Treasury bonds showing its largest 5-session rise since mid-June, back when TIPS yields leapt following the Federal Reserve's steepest hike to overnight interest rates for almost 3 decades.
With the European Central Bank's next policy decision set for Thursday next week, new data yesterday said consumer-price inflation across the 19-nation Eurozone hit a fresh currency-union record of 9.1% per year in August, driven by accelerating price rises in food, non-industrial goods and services.
That will likely force the ECB – which in July raised rates to zero after 6 years of charging depositors a negative rate – to join what Bloomberg calls the "jumbo hike club" according to betting in the futures market, with a 0.75 percentage-point rise now the commonest forecast.
Energy and industrial commodities also fell Thursday, with US crude oil down through $90 per barrel and silver prices trading at fresh 2-year lows beneath $17.70 per ounce.