END_OF_DOCUMENT_TOKEN_TO_BE_REPLACED

GOLD PRICES hit 2-week highs against a falling US Dollar on Tuesday as world stock markets extended their rally towards or above January's all-time record highs.
Political tensions worsened in Europe over both government budgets and immigration, while US President Donald Trump hailed a revamped Nafta trade agreement with Mexico which doesn't include fellow North American nation Canada.
The new deal "in no way" represents a payment from Mexico to the US for building Trump's long-announced border wall says Mexican foreign minister Luis Videgaray.
Silver followed gold prices higher against the Dollar but fell back harder after touching $15 per ounce for the first time since 15 August.
Reaching $1214 per ounce before easing back, gold priced in Dollars today gained 4.6% from mid-August's plunge to 31-month lows at $1160 per ounce.
Latest data show speculators holding record-large bearish bets against gold prices rising on Comex futures and options.
Exchange-traded funds backed by gold have continued to shrink, with the giant SPDR Gold Trust (NYSEArca:GLD) ending Monday at its smallest size since February 2016, needing fewer than 765 tonnes of bullion to back its shares in issue. 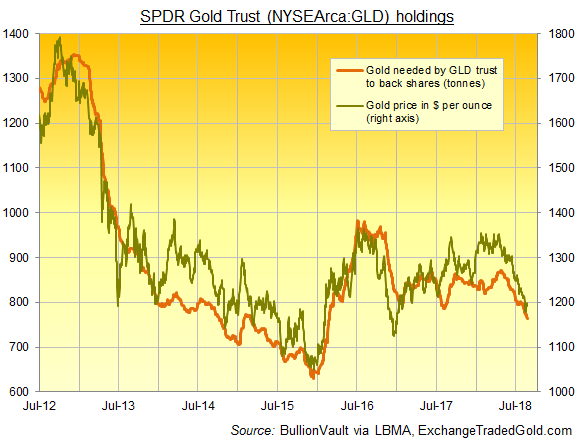 Shanghai gold premiums edged higher to $5.60 per ounce versus London quotes on Tuesday, but still held one-third below average levels.
With London re-opening for business after the August Bank Holiday, gold prices then held flat from last week's finish for Euro and UK investors as the Dollar slipped on the forex market.
Borrowing costs for both the UK and Italy jumped even as the Pound and Euro rose however, with political wrangling in both countries focused on their relationship with the European Union.
Ten-year UK Gilt yields rose to  3-month highs at 1.46% after the UK's pro-Brexit ex-minister Boris Johnson at the weekend called Prime Minister Theresa May's current plan for exiting the EU next March "absolute insanity [in] allowing [London] to be bullied by EU negotiators."
Current UK Brexit secretary Dominic Raab meantime said "freedom of movement will have to end" between the UK and the remaining 26 EU nations even if concessions are made in other areas of the negotiations.
Italian bond yields meantime spiked to 3-month highs, nearing levels seen amid the left-and-right-wing coalition's formation, after deputy prime minister Luigi Di Maio said Rome's spending deficit this year could exceed the European Union's official limit of 3% of gross domestic product.
Di Maio also threatened to veto the EU's own 7-year budget plan, withholding Rome's contribution, unless Brussels backs down over Italy's refusal to accept 150 migrants now held on a coast guard ship near Sicily.
Violence meantime broke out again in east German city Chemnitz last night as anti- and pro-immigration protesters clashed following the arrest of an Iraqi and a Syrian over the murder on Saturday of a Cuban-German attending a street festival.
The Italian government guarantees a 7% annual return to private motorway operator Autostrade – owner of the Morandi Bridge in Genoa which collapsed and killed 43 people this month – reports newspaper Corriere della serra today.
Rejecting calls last week for re-nationalization of Italy's motorways, minister of the interior Matteo Salvini will today meet with Hungary's right-wing prime minister Viktor Orbán in Milan, saying that
"I do not think we'll spend too much talking about immigration.
"On that, we agree: maximum protection of external borders."