END_OF_DOCUMENT_TOKEN_TO_BE_REPLACED

GOLD PRICES fell to start June 2022 at multi-week lows in all major currencies on Wednesday, extending yesterday's drop as major economy bond prices fell and real yields rose further on speculation grew that central banks led by the US Fed are set to hike interest rates further in a bid to cool energy-and-food-driven inflation amid Russia's continuing invasion of Ukraine.
With Friday set to bring market-moving US jobs data for May, large gold bars settled in London's wholesale market – center of the world's bullion trading and storage network – headed into the UK's long Jubilee Bank Holiday weekend at $1840 per ounce, down $50 from start-May and little changed from this time last year.
UK gold prices in British Pounds per ounce also fell to 2-week lows, touching £1451, as the FTSE share index rallied more weakly than other European indices after another sharp sell-off in UK government bonds drove borrowing costs steeply higher.
With UK inflation forecast by the Bank of England to hit double digits even as it pegs overnight rates at 1%, and with conventional 10-year UK Gilt yields now at 2.10% per annum – a 7-year high more than one whole percentage point above start-March – the price of inflation-protected UK debt has also sunk however, driving so-called "real yields" upwards. 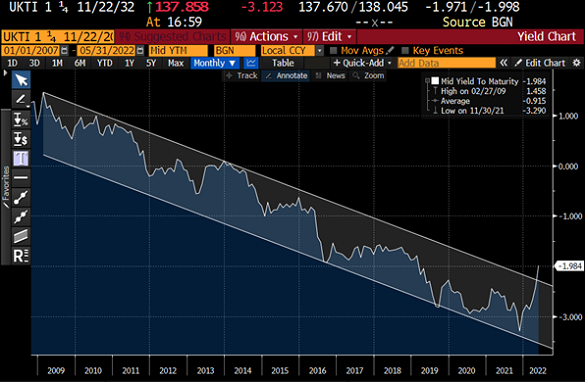 Ten-year UK index-linked Gilt yields yesterday jumped by 25 basis points – a whole Bank of England rate rise in 1 day – as their prices sank, pulling the value of inflation-protected government debt down almost 25% from start-December's peak on the S&P ratings agency's index.
"Carnage in UK linkers," says the Bond Vigilantes blog team at UK asset managers M&G, quoting a note from analysts at US investment giant Citi.
"Would normally expect some [pension or insurance fund] buying given valuation change," the M&G team go on. "Doesn't appear to have happened."
"Why would anyone own linkers in this environment?" asks Citi in its note, pointing out how central banks are "trying to hammer down inflation" at the same time as tightening financial conditions with "higher nominal yields", hitting both the interest rate and redemption value of inflation-protected bonds.
Gold's inverse correlation with 10-year US TIPS yields has reasserted itself since the start of last month after weakening in April, with bullion prices rising and falling more closely in opposition to the direction of rates on the Treasury's inflation-protected securities.
Ten-year TIPS yields were positive above zero for all of last month, the first such instance since December 2019, and rose to a 1-week high of 0.21% per year on Wednesday having finally snapped a historic run of 26 months below zero in April.
Gold priced in Euros meantime hit 9-week lows at €1708 per ounce today as the single currency held firm after European Central Bank policymaker Robert Holzmann said he wants "lift off" in the 19-nation's key interest rate to begin with a half-point hike.
Starting from the current record low of minus 0.5%, "[That] would send the necessary clear signal that the ECB is serious about fighting inflation," Holzmann told Bloomberg, helping to boost the single currency's FX rate as "the weak Euro is not helpful on the inflation front."
Head of the Austrian Central Bank, Holzmann said in late-April that he expected the ECB's first rate-rise from minus 0.5% "by the autumn" with perhaps a second rise in December, before calling for 3 rate rises by the end of 2022 in early May.
Fellow ECB member Ignazio Visco, Italy's central-bank chief, however said Tuesday that Euro rate rises must be "orderly" to preserve unity among the Eurozone – of which Italy is the most indebted member.
ECB president Christine Lagarde last month gave plain hints that she favors "lift off" from minus 0.5% at the July meeting, with an immediate end to new QE money creation and government bond purchases.
Since then the gap between bond yields on Italian debt and German Bunds – seen as the safest Eurozone bonds – has widened to 2 whole percentage points, the heaviest extra burden for Rome to refinance its borrowing since the peak of the initial Covid Crisis in spring 2020.
Euro gold prices have meantime dropped by more than 5%.
May marked gold's steepest Dollar-price drop since September, losing 3.8%.
The drop was worse on a month-average basis, totalling 4.4% and taking gold prices back to their lowest since January after challenging summer 2020's record highs as Russia invaded Ukraine.
With 2 weeks to go until the Fed's next policy decision, and with inflation on its preferred PCE measure slowing only a little at 4-decade highs on the latest data, betting on CME interest-rate futures now sees a 97.7% chance that the central bank will hike by another half-point to 1.50%, with the remaining speculation forecasting a 3/4-point jump – the first since 1994 – to 1.75%.